Table of contents
Introduction Deodorant vs. antiperspirant How antiperspirants work Instructions for use Where to use Risks Controversy

Antiperspirants are products designed to reduce sweat or perspiration on the skin. They are available in many formulations including creams, powders, sprays, towels, and roll-ons.

For individuals who suffer from excessive perspiration (known as hyperhidrosis), a prescription antiperspirant may be a more efficacious option. These agents contain higher concentrations of aluminium chloride or the more potent variant, aluminium hexahydrate.

Botulinum toxin and physical or surgical options to reduce sweating are covered in hyperhidrosis. 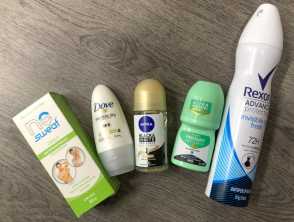 A selection of commercially available antiperspirants

What is the difference between a deodorant and an antiperspirant?

Deodorants are not antiperspirants; they do not prevent sweating. Their aim is to mask the malodour produced by sweat-metabolising bacteria. An antiperspirant preparation may also contain a deodorant.

How do antiperspirants work?

The mechanism of action depends on the active ingredients within the antiperspirant formulation itself.

Antiperspirants containing anticholinergic substances such as glycopyrrolate or diphemanil methylsulfate:

How do you use an antiperspirant?

The following routine should be followed nightly for approximately 7–10 days or when a reduction in symptoms is seen; whichever is earlier. The application interval can then be extended, ie, second daily application, third daily application etc; until a maximum duration between treatments is reached.

For most people, the maximum period between applications that can be reached is one week; however, this varies from person to person. It is generally recommended that patients start at lower concentrations before progressing to higher strengths and/or prescription-only options.

Where can antiperspirants be used?

Typically, antiperspirants are used for axillary hyperhidrosis, but can also be used on other areas prone to hyperhidrosis. This includes areas containing two types of glands.

Diphemanil methylsulfate powder may also be used to reduce perspiration. It is particularly useful on an amputation stump to reduce irritation by a prosthesis.

What are the risks associated with antiperspirants?

The more efficacious antiperspirants contain higher concentrations of their active agents and therefore are at greater risk of causing side effects.

These side effects include:

Topical anticholinergics should not be used in young babies as it has been reported to cause toxicity.

Recently, concern has arisen regarding the potential risk of malignancy with the use of aluminium-containing antiperspirants. Specifically, there has been debate regarding the risk of cancerous changes within breast tissue due to systemic aluminium exposure. However, toxicity related to topical application of aluminium is still controversial as metallic salts have poor systemic absorption.

There has been no scientific evidence to date that has shown a direct correlation between the risk of breast cancer and antiperspirants, which should reassure patients.