What is a melanocytic naevus?

A melanocytic naevus (American spelling - nevus) is a mole, a common skin lesion composed of naevus cells or specialised melanocytes. There are various kinds of melanocytic naevi (nevi).

What is an atypical melanocytic naevus?

An atypical melanocytic naevus is a mole with unusual features.

The term atypical naevus is sometimes used to mean any funny-looking mole, and sometimes to mean a melanocytic lesion that is suspected of being a melanoma (a cancerous mole).

One definition of an atypical naevus is a mole with at least 3 of the following features. 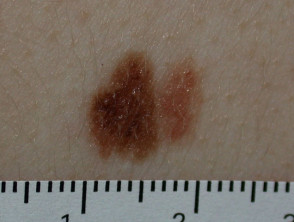 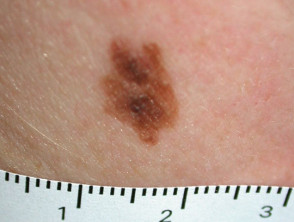 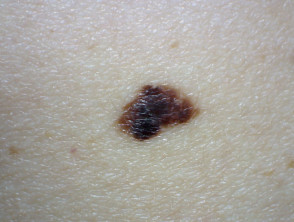 Who gets atypical naevi?

Atypical naevi may occur sporadically or they may be familial (inherited).

Sporadic atypical naevi mainly affect fair-skinned individuals with light coloured hair and freckles (phototype 1 or 2). They are more numerous if they have been frequently exposed to the sun.

Atypical naevi may develop at any time but most of them develop within the first 15 years of life. Typically, people with sporadic atypical naevi have one to ten moles that are larger than 6 mm in diameter.

Atypical naevi that run in families may be part of the FAMMM syndrome. FAMMM is an abbreviation for Familial Atypical Multiple Mole and Melanoma. People with FAMMM syndrome have the following:

People with FAMMM syndrome may have several hundred atypical naevi. 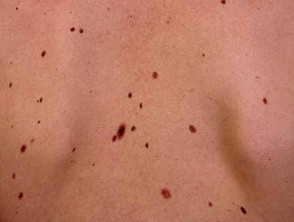 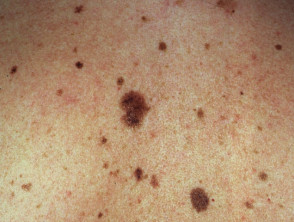 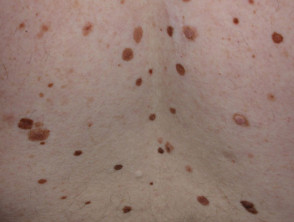 What is a dysplastic naevus?

Histological dysplasia may be mild, moderate or severe. Distinct pathological criteria of a dysplastic naevus are listed here.

Melanoma may arise within a dysplastic naevus, within a non-dysplastic, normal, melanocytic naevus, or more often, in normal-appearing skin.

What is the importance of atypical naevi?

Melanocytic naevi are harmless (benign) and do not need to be removed. However, it is not always easy even for an experienced dermatologist to tell whether a lesion is a naevus or a melanoma, especially if there are atypical features. Dermatoscopy in trained hands may help. If in doubt, a suspicious or changing atypical naevus should be removed by excision biopsy. Partial biopsy is best avoided, as the test may miss a small focus of melanoma. A pathologist will usually make the correct diagnosis, although sometimes deeper levels and/or a second opinion may be required.

People diagnosed with atypical naevi should be taught how to self-examine their skin for new skin lesions and for changes to existing moles that may indicate the development of melanoma. People with numerous moles should visit their family doctor or dermatologist regularly for a thorough skin check.

It is often helpful to keep photographic records of melanocytic naevi (preferably with dermatoscopic images); digital archiving at a photographic skin surveillance clinic is convenient for people with many moles or atypical naevi. The close-up photographs with dermatoscopic views should be repeated from time to time, so change can be detected early and its significance determined.

Careful sun protection is recommended for everyone but is especially important for people with many naevi or atypical naevi. Avoid excessive sun exposure and sunburn, dress up, and use a SPF50+ sunscreen when outdoors in the middle of the day or for prolonged periods.