What is a bacterial biofilm?

Bacterial biofilms are collections of bacteria that have attached to a surface (such as a wound, a prosthetic joint, or teeth) and/or to each other. The biofilm also contains various substances such as DNA, proteins and polysaccharides. These play a role in helping the bacteria resist killing by host defence cells and antibiotics, as well as giving a structure in which the bacteria can grow and communicate with each other. 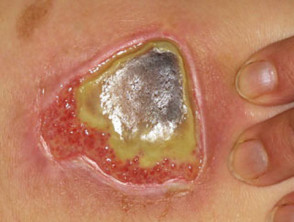 How do biofilms develop?

Bacterial biofilms develop as a natural part of how bacteria grow outside of the laboratory (in vivo). There are several key stages in biofilm development:

What are the roles of the biofilm?

The biofilm provides a support structure for the bacteria to grow. Often several species of bacteria are present in the biofilm and it allows them to communicate with each other via chemical signals.

Bacteria within a biofilm are more resistant to host defences against them and to antibiotics; white blood cells (which fight infection in the body) and antibiotics are less able to pass through the biofilm to reach the bacteria, and where the antibiotic can get through, the bacteria take up the antibiotic more slowly.

Where do biofilms develop?

Biofilms form on many surfaces in the body, including teeth (bacterial plaque), chronic wounds and on prosthetic joints in the case of prosthetic joint infection. They may also form inside lungs with chronic diseases such as in patients with cystic fibrosis and lung damage. Bacteria may also form biofilms when not attached to surfaces, forming a microcolony with other bacteria attached to them by various proteins.

What are the signs that a biofilm has developed?

The wound that has been infected with bacteria forming a biofilm may be much slower to heal or not heal at all, and may not improve with standard antibiotics. It may look sloughy or have an unpleasant smell. Lack of response to antibiotics (patients having persistent fever, unwellness, pain and other symptoms) may be seen in bacteria biofilm infections elsewhere in the body, such as the lungs and prosthetic joints. 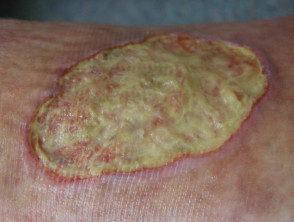 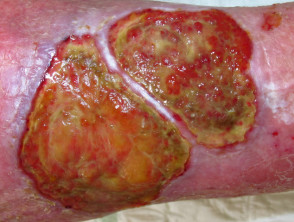 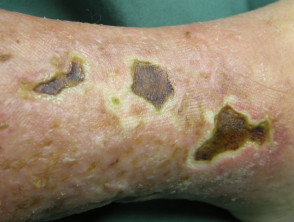 What bacteria are present in a biofilm?

The bacteria that are present in a biofilm will differ between patients, but most commonly in chronic wounds with a biofilm there is Staphylococcus aureus and in 50% of wounds, Pseudomonas aeruginosa. The types of bacteria present on a wound can be ascertained by performing swabs of the wound and culturing for bacteria or doing specific special protein or fluorescent in situ hybridisation studies (FISH).

What is the treatment for wound biofilms?

A careful balance needs to be maintained to reduce the level of infection but minimise damage to the host cells (fibroblasts) repairing the wound. A combination approach is taken with debridement (removal of wound material), antiseptics applied to the wound and courses of antibiotics taken orally or intravenously.

Topical agents applied in an attempt to break down biofilm include:

Other approaches include targeted antibiotic treatment according to the bacteria detected in the wounds via special studies using molecular techniques.