Bufexamac is a topical non-steroidal anti-inflammatory drug (NSAID). It is usually combined with a topical anaesthetic and an antiseptic agent.

Bufexamac is a well-recognised cause of allergic contact dermatitis at the site of application, and it may also cause a widespread polymorphic cutaneous eruption.

What is bufexamac used for?

Bufexamac preparations have been traditionally used to treat insect bites, stings, minor cuts, abrasions, sunburn, thermal burns and inflammatory dermatoses (such as dermatitis) [1,2]. However, there is scarce evidence substantiating its efficacy [3]. It has also been previously manufactured as a suppository for haemorrhoids (piles).

In which countries is bufexamac found?

Due to its adverse effects and establishment as a contact allergen, bufexamac is not available in the following countries as of August 2018 [1,4]:

As of 2020, it is no longer available in Australia. Bufexamac is still available over the counter in other countries.

What are the reactions to bufexamac?

Bufexamac has been established as a cause of allergic contact dermatitis [4]. It can also result in [1,5–11]:

How is an allergy to bufexamac diagnosed?

An adverse reaction to bufexamac is diagnosed by taking a careful patient history, examining the rash, and patch testing. 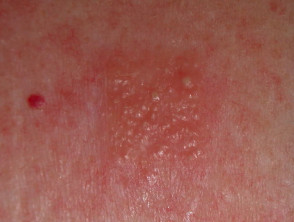 How is the adverse reaction to bufexamac treated?

The use of bufexamac should be stopped and it should be avoided in the long term.

Any resulting dermatitis is treated with topical corticosteroids and emollients.