Demodex is the name given to tiny mites that live in the hair follicle. In humans, demodex is found on facial skin, especially the forehead, cheeks, sides of the nose, eyelashes and external ear canals. It sometimes causes a condition called demodicosis.

The D. folliculorum mite is 0.3–0.4 mm in length and the D. brevis mite is 0.15–0.2 mm. They are invisible to the naked eye, but under the microscope, their structure is visible. The eight legs of this mite move at a rate of 8–16 mm/h, and this is mainly done during the night as bright light causes the mite to recede into the follicle. 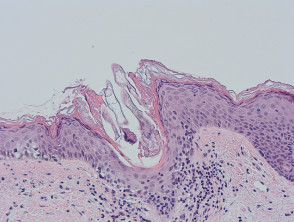 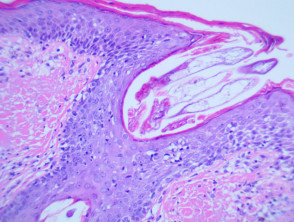 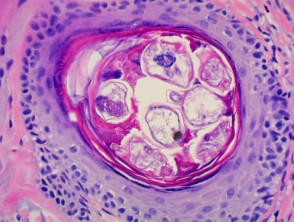 Who has demodex and demodicosis?

Human demodex mites are a normal finding in older children and adults and are rarely observed in children under five years of age. Demodicosis is usually diagnosed in older adults, or immunodeficiency states, such as human immunodeficiency virus (HIV) infection.

What are the clinical features of demodicosis?

Demodicosis results in non-specific symptoms and signs on facial skin. These most often include:

Macules, papules, eczema, folliculitis and pigmentation have also been described.

Patients with demodicosis may have eye irritation, itching and scaling of eyelids (blepharitis or eyelid dermatitis). There may be lid thickening, loss of lashes (madarosis), conjunctival inflammation and decreased vision.

Increased numbers of Demodex mites have been observed in the following conditions:

The skin condition known as demodex folliculorum is also known as pityriasis folliculorum or spinulate demodicosis. It is a form of digitate keratosis, with slight redness and sandpaper-like texture of the skin due to follicular scale. It can cause irritation and burning sensation.

How is demodex diagnosed?

Demodex folliculorum is characterised histologically by:

What is the treatment for demodicosis?

Demodex can only live in the human hair follicle, and when kept in check, they cause no problems.  Home treatment and prevention strategies include:

Treatment with acaricides is aimed at reducing the excessive proliferation of the mites, and by the clinical cure of symptoms and signs. Options include:

In severe cases, such as those with HIV infection, oral ivermectin may be recommended.

Many treatments for periorbital demodicosis involve spreading an ointment at the base of the eyelashes at night to trap mites as they emerge from their burrow and move from one hair follicle to another. One treatment is to scrub the lashes and lash roots with baby shampoo, and then treat the area with tea tree oil or macadamia nut oil to try and kill any eggs.