What is Dercum disease?

Dercum disease is also known as adiposis dolorosa. It is a rare disease characterised by a combination of features:

Dercum disease may be associated with obesity, emotional upset and fatigue.

It was first described in 1892, by Dercum, who named the disease 'adiposis dolorosa' to describe the painful adiposities (fat accumulations) seen in his 3 patients. 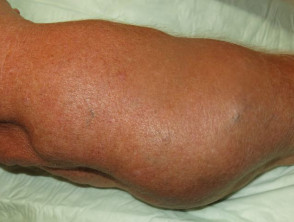 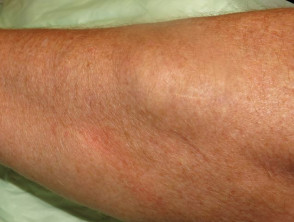 Who gets Dercum disease?

How is Dercum disease diagnosed?

A diagnosis of Dercum disease can be made through a systematic physical examination and identification of the characteristic triad of features (multiple lipomas, painful plaques and obesity).

Multiple lipomas may also be features of:

A biopsy may be helpful to distinguish a lipoma from an angiolipoma (another type of painful fat overgrowth).

Other lesions that may mimic a lipoma include:

What is the treatment for Dercum disease?

Dercum disease seems to benefit from the patient losing weight. Surgical excision or liposuction of selected lipomas may help, especially when they are in inconvenient locations. Surgical excision of many lipomas is not usually thought to be helpful and risks surgical complications.

Conventional pain medicines do not seem to reduce the discomfort associated with Dercum disease. Some reports do suggest that a local anaesthetic injection or patch can provide relief for intractable pain.