What is flagellate erythema?

Flagellate erythema is an uncommon patterned rash, which occurs in linear streaks and usually follows chemotherapy. It is also called flagellate pigmentation during its brown recovery phase.

Flagellate erythema was first described in association with bleomycin treatment. It has an onset anywhere between one day and several months after administration. Subsequently it has also been associated with peplomycin (a bleomycin derivative), docetaxel (another chemotherapy agent), dermatomyositis, adult-onset Still disease and Shiitake mushroom dermatitis.

The exact cause of this rash is uncertain, but a number of theories have been postulated. One theory is that trauma (scratching) causes vasodilation with local bleomycin accumulation in the skin causing a subsequent fixed drug eruption.

Flagellate erythema typically presents with an itch, co-inciding with the onset of red linear streaks, which are found most commonly on the back and flanks. Over time the itch and redness resolve to leave brown pigmentation. The pattern in dermatomyositis is more inflammatory with persisting erythema. 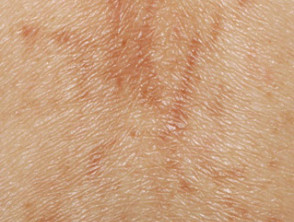 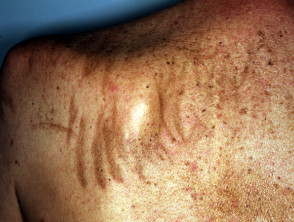 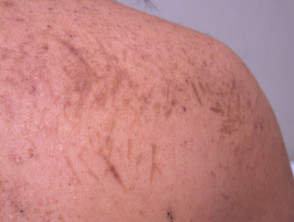 The diagnosis of flagellate erythema is usually made on observing the typical pattern of the rash, particularly when it follows administration of chemotherapy.

In some cases a skin biopsy may be performed. The histology has been reported to show hyperkeratosis, focal parakeratosis, irregular acanthosis and spongiosis within the epidermis. Dermal oedema and perivascular lymphocytes are seen, and a band of basal epidermal melanin pigment is characteristic.

In most cases the rash resolves spontaneously. Addressing the symptom of itch is the main treatment measure. Systemic steroids such as prednisone or dexamethasone appear to delay the onset of the rash, and may also aid in speeding its resolution. Heat in an area previously affected by flagellate erythema has caused recurrence, called heat-induced recall. Therefore cooling before chemotherapy administration may be able to prevent it. In the past a glycerine and chlorhexidine mixture has been reported as being used successfully.