Bleomycin and the skin

Bleomycin is an antibiotic derived from the fungus Streptomyces verticillus but is mainly used as a chemotherapy drug. It causes DNA strand scission (breakages in the DNA strand), preventing cell replication.

Bleomycin is mainly excreted from the body via the kidneys. It can also be inactivated in the body by hydrolase enzymes, the level of which varies in different tissues. There is a high rate of skin side effects when used intravenously to treat cancer because skin, in particular, has no bleomycin hydrolase activity.

Skin side effects of systemic bleomycin

Skin side effects develop in approximately 50% of patients receiving bleomycin for cancer.

Common side effects are: 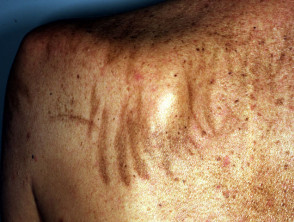 Less commonly reported side effects include:

Bleomycin is approved by the FDA (Food and Drug Administration in the USA), Medsafe in New Zealand, and similar regulatory authorities in other countries, for the treatment of squamous cell carcinoma of the head and neck, cervix, penis and skin, Hodgkin lymphoma and Non-Hodgkin lymphoma, testicular cancer and malignant pleural effusion.

It is generally used intravenously for these indications. Other routes of administration for the treatment of cancer include intramuscular and intrapleural injections as it is poorly absorbed after oral intake.

The use of bleomycin by injection into specific skin lesions (intralesional) has not been approved by the FDA or by Medsafe in New Zealand. Informed consent to explain this should be obtained before such use. However, there have been multiple clinical trials and case reports in the medical literature describing the use of intralesional bleomycin, documenting the beneficial responses and adverse events.

Bleomycin penetrates through cell membranes poorly. Local anaesthetics disrupt cell membranes so the bleomycin may be made up in local anaesthetic solution (such as lignocaine) to increase its penetration into cells. Electrical impulses are sometimes used to improve bleomycin efficacy via electrodes placed in the skin around the injected area (electrochemotherapy).

What are the indications for intralesional bleomycin?

The most common use of intralesional bleomycin injections is for viral warts that have failed to respond to conventional therapies such as liquid nitrogen cryotherapy and wart paints/gels (e.g., high-strength salicylic acid). It has been used successfully in immunocompromised patients such as organ transplant recipients. It may also be considered for use in difficult-to-treat sites, such as under the nail, or wart types, such as mosaic plantar warts. There have been successful but limited reports of use for treatment-resistant genital warts.

Other skin conditions for which intralesional bleomycin has been used include:

Protocol for the treatment of warts

Bleomycin should only be prepared for use by health professionals experienced in the handling of chemotherapeutic agents.

Warts may be prepared before injection by debulking such as paring down with a scalpel blade.

For the treatment of warts, bleomycin sulphate is usually diluted to 1U/ml (1mg/ml) in normal saline or 1% lignocaine (without adrenaline). The solution is reported to be stable for 4 weeks if kept refrigerated.

The solution is injected into the wart, aiming to see blanching. A number of injection techniques have been reported (see below). Most commonly a 1ml tuberculin syringe and Luerlock 30G needle, or an insulin syringe where the needle is joined to the shaft of syringe, is used. Because of the very folded surface of warts, leakage of solution to the surface is sometimes seen. The usual injected volume is 0.1-2ml per treatment session. The optimal dose has not been determined, but this appears to be a safe and effective range. Injection of many warts in a single session exceeding this dose range may result in an increased risk of side effects.

The wart is re-assessed in 3-4 weeks for possible further treatment. In many of the reported clinical trials, bleomycin was injected on 1-3 occasions, although in one study the average number of treatments per wart was 4.

Bleomycin injections are virtually always painful. General anaesthesia, regional anaesthetic blocks, infiltrative local anaesthesia and topical anaesthetic cream may be used, particularly in children or when multiple injections are required. Jet injectors, modified tattoo machines, monolet needles and pricking through with bifurcated vaccination needles may reduce the pain of the procedure. However, in general, the pain is tolerable and comparable to cryotherapy.

Redness, swelling, pain and a burning feeling are common immediately after the injection. The pain may persist for up to 72 hours and usually responds to paracetamol, sometimes with additional codeine.

It is common for a black scab to form and it falls off after 4 weeks. This can be a useful indicator of effectiveness as it implies tissue death and detachment of the lesion.

These have been very rarely reported but include anaphylaxis, itch, urticaria (hives), flagellate erythema / hyperpigmentation and pneumonia-like symptoms. No cases of pulmonary fibrosis (seen with intravenous bleomycin) have so far been reported following intralesional bleomycin.

Because of the possibility of developing Raynaud phenomenon, it is recommended that intralesional bleomycin is not performed in patients with peripheral vascular disease or connective tissue disease.

The use of bleomycin is not recommended in pregnancy and lactation because of the risks of the drug to the baby. It has been shown to cause birth defects in mice.