What are venous malformations?

Venous malformations are a type of vascular naevus or birthmark. They are due to malformed dilated veins and are non-cancerous. They appear as skin coloured, blue or purple swellings on any part of the body, and there are often prominent veins near the skin surface. Like capillary vascular malformations (port wine stains), venous malformations are always present at birth, although they may become more obvious with time. They may vary in size from a small dot to occasionally involving a whole limb. Unlike cavernous haemangiomas, they grow in proportion to the child's general growth.

Glomuvenous malformation is also known as glomangioma, or glomangiomatosis. These differ from standard venous malformations by being multiple, slightly raised, blue or bluish-purple in appearance. There are characteristic features of this lesion on skin biopsy (histology). Glomuvenous malformations may be inherited as an autosomal dominant trait, which means half the children of an affected person will have a tendency to develop these lesions to a variable extent. They are due to a specific mutation in the glomulin gene.

Glomuvenous malformations should be distinguished from solitary glomus tumours, which usually occur under or beside a nail in an adult, and are not inherited. They are small, but exquisitely tender blue or purple nodules with a fibrous rim. An x-ray may show underlying erosion of the bone. Solitary glomus tumours are due to a proliferation of glomus cells; the diagnosis is confirmed by skin biopsy.

An arteriovenous malformation refers to communication between an artery and a vein. The affected skin feels warmer than the surrounding skin. It may be possible to feel a ‘thrill’ due to the high flow of blood through the arteriovenous malformation. The doctor listening with a stethoscope may hear a rumble or ‘bruit’. These are sometimes associated with other abnormalities in various vascular syndromes.

The blue rubber bleb naevus syndrome or Bean syndrome is a rare form of venous malformation in which there are skin and gastrointestinal tract lesions. There is frequently a family history, with autosomal dominant inheritance i.e. the tendency to the syndrome is passed on to half of one's children.

The skin lesions present as compressible blue or purple rubbery nodules with a wrinkled surface. There may be a single lesion or hundreds of lesions occurring all over the body. Lesions in the GI tract (mouth to rectum) may bleed and cause anaemia or rarely, sudden death. The nodules remain unchanged for life.

Surgical excision, sclerotherapy and/or laser therapy may be indicated. However in most cases no treatment is required.

A case history has described remarkable improvement after oral sirolimus (which inhibits angiogenesis). This drug is undergoing investigation as a potential medical treatment for severe vascular malformations but may have significant adverse effects. 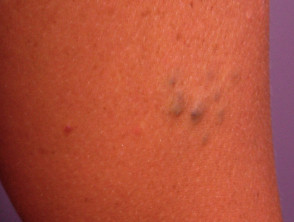 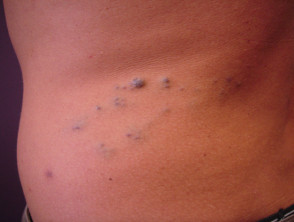 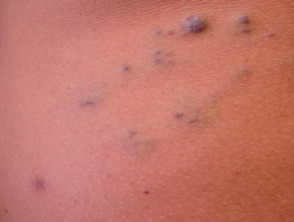 Maffucci syndrome is a rare genetic disorder that affects both males and females. It is characterised by cartilage growths (enchondromas), bone deformities, and venous malformations. The disease is present at birth or develops during infancy.

The venous malformations protrude as soft blue nodules on the arms and legs or elsewhere. The enchondromas are often found on the fingers and toes or at the ends of the long bones. Sometimes they result in fractures. Cancer (chondrosarcoma) may arise within the enchondromas in about 30% of adult patients.

Venous malformations are usually diagnosed clinically. However, an ultrasound scan is often performed to find out the extent of the abnormality. Characteristically, a venous malformation shows compressible tubular blood vessels. In some cases, fresh or older calcified blood clots (thrombosis) may be detected.

Ultrasound evaluation of arteriovenous malformations also shows evidence of shunting of blood between the affected artery and vein with turbulent blood flow.

Treatment of venous malformations is very difficult and often involves complex surgery and/or ultrasound guided sclerotherapy. Vascular lasers may be useful for some cases.

Extensive malformations require careful assessment, often by a team of specialists that may include a paediatric dermatologist, paediatrician, radiologist, plastic surgeon and/or vascular surgeon.

General care may include pain relief and compression therapy.