What is Raynaud phenomenon?

Raynaud phenomenon is an episodic reduction in the blood supply to the fingers, toes, or nipple occurring mainly in response to cold (vasospastic disease).

Who gets Raynaud phenomenon?

Raynaud phenomenon can be divided into two main types:

Primary Raynaud phenomenon is about twice as common as the secondary form. It usually starts under 25 years of age and is five times more common in women than in men. Individuals often recall cold intolerance dating back to childhood.

Systemic sclerosis (a systemic form of scleroderma) is the most likely connective tissue disease to present with Raynaud phenomenon, especially the CREST syndrome form: calcinosis, Raynaud, (o)esophageal dysfunction, sclerodactyly, telangiectasis. Ulceration of the fingertips may occur if vasospasm is severe.

Medications that may aggravate or cause Raynaud phenomenon include beta-blockers (widely used for angina, high blood pressure, or anxiety), migraine remedies containing ergotamine or methysergide, bleomycin and other chemotherapy agents (for cancer treatment), clonidine (for high blood pressure, migraine, or flushing), bromocriptine (for Parkinsonism and some other conditions), imipramine (for depression), and rarely, the oral contraceptive pill. If medication is the cause, stopping it can result in rapid improvement.

Raynaud phenomenon may develop in a limb affected by a stroke and can also occur in multiple sclerosis and polio. Rarely, Raynaud phenomenon is due to an extra rib causing compression on nerves and blood vessels.

Disorders that increase the viscosity (thickness) of the blood can also cause Raynaud phenomenon, by reducing blood flow through the small blood vessels in the fingers and toes.

Raynaud phenomenon has been associated with hypothyroidism.

What are the clinical features of Raynaud phenomenon?

An attack of Raynaud phenomenon is triggered by exposure to cold, such as going out into a cold wind or immersing the hands in cold water. Sudden emotional or psychological upsets can also bring on an attack. The hands are most often affected, but it sometimes involves the feet and occasionally the nipples, nasal tip, or earlobes.

Typically, one or more fingers will turn white and numb and, on rewarming, blue due to a sluggish blood flow. This is sometimes followed by a bright red colour and swelling due to a compensatory increase in blood flow before the normal skin colour and sensation are restored.

Attacks may be painful and can last from minutes to hours.

Raynaud phenomenon of the nipples presents as breast pain, often associated with pregnancy or lactation. It may follow breast surgery. Typically it presents as extremely painful or throbbing breastfeeding precipitated by exposure to cold, and the usual sequential two or three colour phases of blanching, blueness and/or erythema. 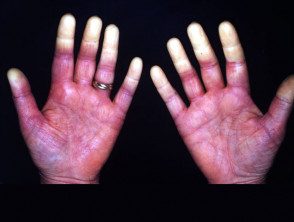 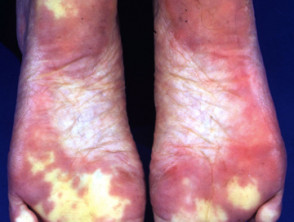 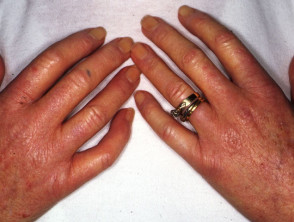 What are the complications of Raynaud phenomenon?

What is Raynaud phenomenon diagnosed?

Raynaud phenomenon is a clinical diagnosis but it is important to consider potential causes.

You should seek medical advice for the following reasons:

A history and thorough examination, including nail fold capillaroscopy, should be undertaken to determine if symptoms are due to primary or secondary Raynaud phenomenon. Investigations may include blood tests, X-rays, or other types of imaging.

What is the treatment for Raynaud phenomenon?

Diagnosis of any underlying disease, or predisposition to disease, may lead to specific treatment. Drugs causing vasoconstriction should be discontinued, if possible.

First line medications for primary Raynaud phenomenon include calcium channel blockers, such as nifedipine or diltiazem. Verapamil appears ineffective. The calcium channel blockers act by dilating the small blood vessels, thereby increasing the blood flow to the peripheries. The dose may be gradually increased if necessary. It is important that blood pressure is monitored.

There are promising reports that botulinum toxin injections into the neurovascular bundles at the palmar arch at the base of the digits result in rapid reduction in pain and can heal digital ulcers.

Very severe disease that is resulting in ulceration or resorption of the fingertips may be treated by an intravenous infusion of prostacyclin. This requires admission to hospital for a few days.

A very small minority of patients with severe and intractable Raynaud phenomenon may require a sympathectomy. This involves cutting the nerves that constrict the peripheral blood vessels. The procedure may have complications and has a fairly low success rate, so should only be considered if all else has failed.

What is the outcome for Raynaud phenomenon?

Depending on the cause, Raynaud phenomenon may persist for a long time or may improve spontaneously.