What is thromboangiitis obliterans? 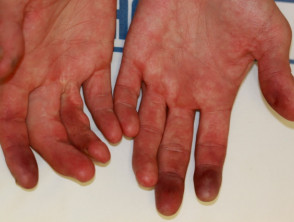 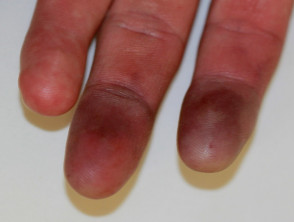 Who gets thromboangiitis obliterans?

Thromboangiitis obliterans occurs almost exclusively in smokers. It is most common in Eastern Europe, the Middle East, and Asia. Most patients are between 20–45 years old consuming homemade cigarettes. The incidence appears to have decreased over recent years as smoking has decreased. American statistics estimate approximately 10–20 cases per 100,000.

What are the symptoms of thromboangiitis obliterans?

The most common presentation of thromboangiitis obliterans is of painful purple/blue areas on the fingers or toes (blue toe syndrome). It is often one-sided and may involve isolated fingers or toes. Often the pain is worse at night, with exercise, and in cool weather. With time, the areas may ulcerate or become black secondary to the death of the involved skin (gangrene). The disease progresses in patients who continue to smoke and may lead to complete loss of digits or limbs. On examination, the hand and foot pulses are often lost at an early stage. Other associated problems may include recurrent venous thrombosis (superficial or deep veins), erythema nodosum, and rarely involvement of the blood supply to internal organs such as the kidneys, heart, and brain.

The cause of thromboangiitis obliterans is not fully understood but it is probable that the smoking triggers thrombosis in the blood vessels, leading to a lack of oxygen and nutrients to the affected tissue. Research has demonstrated the presence of immunoglobulins and endothelial cell antibodies suggesting an immunological mechanism. The blood level of these antibodies can be used as a marker of disease activity. Response to acetylcholine (a chemical which leads to relaxation of blood vessels) has also been shown to be decreased in patients with thromboangiitis obliterans compared to normal subjects.

In some cases, thromboangiitis obliterans has been associated with chronic arsenic poisoning.

What tests are necessary for thromboangiitis obliterans?

A skin biopsy can be helpful although the features are not specific for thromboangiitis obliterans. The histology usually shows intraluminal thrombosis (a blood clot within the vessel) with associated microabscess formation. A mixed infiltrate of white blood cells and giant cells may be seen in all layers of the vessel wall, although the internal elastic lamina is classically spared and helps distinguish thromboangiitis obliterans from other types of vasculitis.

Tests to rule out the presence of other diseases such as diabetes, clotting disorders, connective tissue disease, atherosclerosis and embolism are usually performed.

A scan of the limb arteries (arteriogram) may be performed and is likely to show normal proximal vessels (these are the ones closest to the body) but multiple narrowings and occlusions distally (closest to the hands and feet). Many new bypass-vessels (corkscrew collaterals) often develop in an attempt to maintain blood supply.

How is thromboangiitis obliterans treated?

Although no single treatment is considered definitive, consideration of an intravenous infusion of Iloprost (a medication that helps relax blood vessel walls and reduce clotting), sympathectomy (ablation of the nerves causing blood vessel constriction), and removal of gangrenous tissue may be necessary.

There is little evidence that systemic steroids or anticoagulants are helpful.