What is Gardner syndrome?

Gardner syndrome is a variant of ‘familial adenomatous polyposis’ (FAP), an inherited disease that is characterised by gastrointestinal polyps, multiple osteomas (benign bone tumours), and skin and soft tissue tumours. Polyps tend to form at puberty with the average age of diagnosis around 25 years of age. In almost all patients, polyps will progress to malignancy, resulting in colorectal cancer so that timely detection is essential.

Gardner Syndrome is due to mutations on the APC gene on chromosome 5q22. The gene plays a role in tumour suppression. Gardner syndrome is inherited as an autosomal dominant trait so that an affected person has a 50% chance of passing on the gene to each of their children. 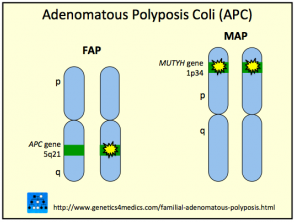 What are the clinical features of Gardner syndrome?

How is Gardner syndrome diagnosed?

Gardner syndrome is diagnosed based on the following features.

Radiological studies are essential for patients and family members with suspected Gardner syndrome.

What is the treatment for Gardner syndrome?

Treatment of epidermoid cysts in Gardner syndrome is similar to that used for ordinary cysts and involves excision. Occasionally intralesional steroid injections may be used if the cysts are inflamed.

Surgical removal of gastrointestinal polyps is recommended because of the very high risk of polyps developing into cancer. Patients need regular colonoscopies.

Osteomas may also require excision only if they are severely deforming or if they are a nuisance.