Microorganisms found on the skin

What are the skin microflora?

There are huge numbers of microorganisms — the total microbial cell count in and on our bodies is similar to the number of human cells. After the gut, there are more microorganisms on the skin than anywhere else in the body. Bacterial species are by far the most numerous; however fungi, viruses and mites are also found on the skin of normal healthy humans.

Resident microbiota are found in the upper parts of the epidermis and congregated in and around the hair follicles. They include:

Some microbiota are considered transient, as they can be only isolated and cultured from skin samples from time to time. These are mainly Gram-positive bacteria, including clostridia in the perineal area. Occasionally, moist areas allow the growth of Gram-negative Acinetobacter.

Other Gram-negative bacteria are not considered part of the normal skin micobiota, as the relatively low humidity and high osmotic pressure of the skin are unfavourable for their growth.

Where on the skin are microflora found?

Microorganisms are found all over the skin surface but the species vary with anatomical site.

Skin sites can be grouped into three types:

Dry sites include the forearms, hands, legs and feet. They have the most diverse microbiota, due to high exposure to the external environment. Coagulase-negative staphylococci predominate (eg, S. epidermedis and S. hominis).

Corynebacteriam flourish in the moist skin of the skin folds: elbow creases, beneath the breasts, in-between the toes and the groins.

Sebaceous body sites include the head, neck and trunk, where sebaceous glands secrete an oily substance, sebum, allowing cutibacteria to thrive. Demodex mites (Demodex folliculorum and Demodex brevis) and the fungus Malasezzia also congregate in the oily areas of the face. 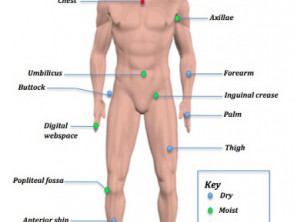 Malasezzia are commonly found all over the body except for the feet. They are more numerous in oily areas, as described above.

Very little is known about the prevalence of viruses on normal skin. Traditionally, viruses on the skin have been termed pathogenic, ie harmful, but recent research disputes this.

What is the role of microflora in human health?

Microorganisms can be grouped according to their relationship with us:

The majority of microorganisms on our skin are commensals, as they infrequently cause ill health. However, in some circumstances commensal microbes such as S. epidermidis have beneficial or pathogenic roles.

Does everyone have the same skin microorganisms?

Generally speaking, most people have similar but not identical microorganisms. Some variation is due to age and environment.

Initial colonisation of a newborn baby's skin usually occurs during vaginal delivery through the birth canal. The baby's skin is at first sterile when the birth is by caesarean section.

After birth, key factors influencing microbial growth on the skin include:

Can the skin microbiota be harmful?

Microorganisms are implicated in a number of infectious and non-infectious skin conditions affecting the epidermis, hair follicles, dermis and subcutis.

Whilst commensal organisms are harmless in most people, they may cause minor or even potentially fatal disease in another. The following factors make pathogenesis more likely: