What are Osler nodes and Janeway lesions?

Osler nodes and Janeway lesions are two rare but well-known skin manifestations of bacterial endocarditis. They have also rarely been described in systemic lupus erythematosus (SLE), gonococcaemia (gonorrhoea), haemolytic anaemia and typhoid fever. They are important as they may help in the earlier diagnosis of a serious medical disorder.

What is bacterial endocarditis?

Bacterial endocarditis is an infection of the lining of the heart caused by various bacteria. It most often affects the heart valves. The bacteria gain access to the heart via the bloodstream; an infection elsewhere in the body may or may not be apparent. While some bacteria can cause infection in normal heart valves, bacterial endocarditis more commonly affects patients with abnormal valves as a result of previous rheumatic fever, valve surgery/replacement, or congenital abnormalities.

The responsible bacteria include various species of staphylococcus, streptococcus, pseudomonas, bartonella and several other organisms.

Bacterial endocarditis is often divided into ‘acute’ and ‘subacute’ varieties depending on the speed that it progresses. The symptoms may include fever, lethargy, shortness of breath, chest pain or palpitations. These symptoms require prompt assessment and investigation by a physician.

Splinter haemorrhage in the proximal nail plate is also a sign of bacterial endocarditis.

Osler nodes are red-purple, slightly raised, tender lumps, often with a pale centre. Pain often precedes the development of the visible lesion by up to 24 hours. They are typically found on the fingers and/or toes. They can occur at any time during the course of endocarditis (usually subacute) and last from hours to several days. 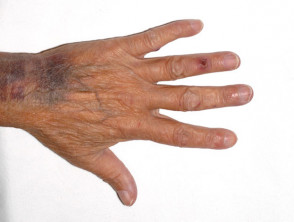 Osler node on ring finger as well as more subtle nodes seen on the little and middle finger. 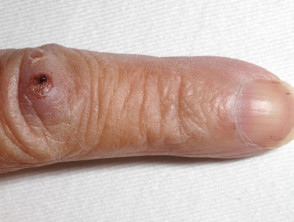 How did Osler nodes get their name?

The lesions were first described by French Physicians as ‘Nodosites Cutanees Ephemeres’ meaning ‘Cutaneous nodules of short duration’ and by Dr Mullen of Hamilton. Parkes Weber later suggested that they are known as Osler nodes in recognition of the fact that Sir William Osler (1849-1919) had "first called attention to their full diagnostic importance". His first description of these lesions was in 1893. Sir William Osler, a Canadian-born Physician, wrote 1344 publications on a wide range of medical topics.

What is the cause of Osler nodes?

The underlying cause of the nodes has been debated since Osler first proposed micro-embolisation as a cause (this is the scattering of tiny particles around the bloodstream). Early reports favoured an allergic or immunological cause, but more recent reports have isolated bacteria from within the nodules.

A skin biopsy (histology) may reveal a neutrophilic vasculitis (inflammation of blood vessels) affecting the glomus apparatus of the ends of the fingers, or microabscess formation without evidence of vasculitis. It has been postulated that early biopsies show bacteria within the microabscesses and as time progresses, the nodes become sterile and hypersensitivity vasculitis or small vessel vasculitis develops, mediated by the immune system.

A careful search for endocarditis is made. This includes multiple blood cultures, other blood tests, urine tests, ECG, chest X-ray, and an echocardiogram (heart ultrasound scan). The diagnosis may be elusive.

A skin biopsy may be helpful to confirm the diagnosis of the Osler nodes.

What is the treatment of Osler nodes?

Treatment of Osler nodes is aimed at the bacterial endocarditis and involves intravenous antibiotics and sometimes valve surgery.

The skin lesions tend to heal spontaneously without scarring.

In contrast to Osler nodes, Janeway lesions are non-tender, often haemorrhagic (bleeding into the skin), and occur mostly on the palms and soles on the thenar and hypothenar eminences (at the base of the thumb and little finger respectively). They tend to last days to weeks before healing totally. Janeway lesions are more commonly seen in acute endocarditis, when bacteria such as Staphylococcus aureus may be cultured from them. The histology is usually consistent with septic micro-embolism (i.e. bacteria may be found within the blood vessels).