What is red ear syndrome?

Red ear syndrome (RES) is an uncommon disorder that presents with intermittent attacks of pain and reddening of one or both ears.

Who gets red ear syndrome?

Red ear syndrome affects all age groups with a median age of onset of 44 years (range 4–92 years). In children there is a male predominance of 2:1 in reported cases, compared to a slight female predominance in adults (1.25:1). Studies in children and adolescents presenting with migraines to a neuropsychiatry clinic found 20–25% had red ear syndrome on specific questioning, suggesting it is more common than the 100+ reported cases would indicate.

Red ear syndrome can be classified as either primary and secondary.

The pathogenesis of red ear syndrome is unknown and it is likely to be different in the two groups.

There are two theories as to how the syndrome can arise.

What are the clinical features of red ear syndrome?

Red ear syndrome is characterised by paroxysmal episodes of pain and redness of one or both external ears. Redness can sometimes extend over the adjacent cheek. Unilateral ear involvement occurs in approximately 2/3 of cases, with the left ear more commonly involved than the right. Nearly one third report episodes are always bilateral. The pain is usually described as an annoying burning discomfort, but can be moderate to severe. Sometimes there is associated swelling of the ear with a feeling of fullness, and other symptoms such as redness or watering of the eye.

The frequency of episodes is variable, ranging from multiple episodes every day through to intermittent attacks that may occur in clusters every month or two. Daily episodes are reported by the majority.

The duration of an episode may last only seconds up to 4 hours, but typically lasts 30–60 minutes.

Episodes can be spontaneous or triggered. Triggers are more common with secondary red ear syndrome and include heat, touching or rubbing of the ear, hair brushing, teeth cleaning or grinding, or chewing. When associated with migraines, ear symptoms typically begin at the same time as the headache and resolve as the headache settles. However, the ear(s) may not redden with every migraine event.

Ear reddening can also occur as part of erythromelalgia, usually at the same time as the more typical hand and foot symptoms. 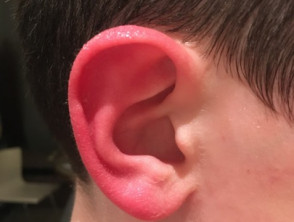 What are the associations with red ear syndrome?

How is red ear syndrome diagnosed?

Diagnostic criteria for red ear syndrome have been proposed:

A.    Episodes of external ear pain lasting up to 4 hours

B.    The ear pain has at least two of the following characteristics:

iv.     Triggered by cutaneous or thermal stimulation of the ear

C.    The ear pain is accompanied by ipsilateral redness of the external ear

D.    Attacks occur with a frequency of ≥1 per day, although cases with lower frequency may occur

F.    Not attributed to another disorder.

What is the differential diagnosis for red ear syndrome?

What is the treatment for red ear syndrome?

Case reports have described many treatments such as indomethacin without consistent results. Gabapentin seems to be the most widely used treatment.

What is the outcome for red ear syndrome?

Red ear syndrome is usually a chronic condition. In some cases, the frequency of episodes may gradually decline with time.