What is the hand-foot syndrome?

Hand-foot syndrome is a relatively common form of cutaneous dysaesthesia, mainly of the palms and soles, which follows chemotherapy. It has many other names including:

It relates to the dose of chemotherapy drug — both the peak blood level and the cumulative dose appear to be important.

Who gets hand-foot syndrome?

Hand-foot syndrome always follows chemotherapy, with an overall frequency of about 2%.

What are the clinical features of hand-foot syndrome?

The hand-foot syndrome usually first appears within days of commencing chemotherapy, although it may take several months and a number of chemotherapy cycles. The palms are always involved and less consistently the soles, fingers, toes, tops of feet and backs of hands. Uncommon sites include the face, genital area, and sites affected by pressure or friction such as folds of skin and under tight clothing.

The first symptom is tingling, numbness, a feeling of tightness/stiffness or pain in the palms/fingers and sometimes a little later also the soles of feet/toes. This is followed 2-4 days later by bright redness of the palms and soles, which is symmetrical and sharply defined. Burning pain and swelling can develop. If severe it may blister and rarely ulcerate. Onycholysis (lifting of nails) is associated with severe reactions. In patients with dark skin, the skin may thicken and become darker in colour. It may interfere with daily activities such as holding objects, doing up buttons or walking. Cracking and peeling of the skin can occur. Wounds may heal less well.

If the chemotherapy is ceased then the reaction settles usually over 1-2 weeks (range 1-5 weeks), so it has recovered by the time the next cycle is due. Healing occurs without scarring unless there has been skin ulceration or necrosis (skin loss/death). With each subsequent cycle of chemotherapy, the reaction will appear more quickly, be more severe and will take longer to heal.

Although it is not life-threatening, hand-foot syndrome certainly affects the quality of life and is often a dose-limiting side effect.

Hand-foot syndrome due to cytarabine 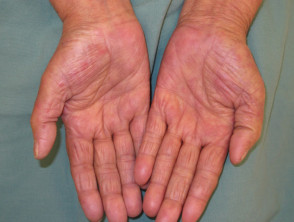 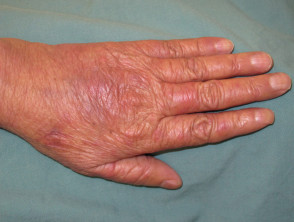 Dorsal hand-foot syndrome due to chemotherapy 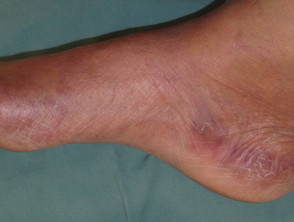 A number of grading systems have been described to assess the severity of the hand-foot syndrome. A recently devised grading follows.*

How is the diagnosis of hand-foot syndrome made?

The diagnosis is usually made clinically. A skin biopsy may show a variable degree of scattered individual skin cell death, inflammation at the junction of the epidermis and dermis and opening up of blood vessels.

Why does hand-foot syndrome occur?

Hand-foot syndrome is remarkable for its localisation to the palms and soles. It has been proposed that the drug is excreted in the sweat from the eccrine sweat glands. This type of sweat gland is particularly numerous on palms and soles where they produce sweat continuously. The drug then concentrates in the skin and exerts its usual cytotoxic effect on the rapidly dividing skin cells.

Skin cells of the palms have been shown to divide more rapidly than those on the back, so they would be more susceptible to a chemotherapy drug. The enzyme that converts the prodrug capecitabine to the active drug 5-fluorouracil is particularly active in the palms. The skin of the palms and soles has a number of other unique features including its blood circulation, temperature and pressure effects which may also be relevant. The involvement of the palms more consistently than the soles may relate to activities of daily living.

What is the treatment of hand-foot syndrome?

Until recently, the only treatment shown to be of any benefit for the hand-foot syndrome was ceasing the chemotherapy, waiting until the reaction has improved and recommencing therapy at a lower dose and/or frequency.

Patient education regarding this condition before starting chemotherapy is important so that patients report it promptly, especially when on chemotherapy drugs administered orally at home.

Use of a hand/foot moisturiser before starting chemotherapy is recommended. Avoiding mechanical trauma to hands and feet (and all body skin) such as friction, heat, pressure, irritants and adhesives may help limit the reaction. This includes wearing loose-fitting comfortable clothing, which avoids tight pressure or rubbing.

Cooling of the hands and feet during chemotherapy administration has had variable success in preventing the reaction.

Once the reaction has developed, analgesics, cold compresses and elevation or cushioning of the affected parts may give some relief. Various treatments have been tried, usually on small numbers of patients, including topical and oral pyridoxine (vitamin B6), topical and oral corticosteroids, topical DMSO and topical vitamin E, with inconsistent responses.

In a randomised double-blind placebo-controlled study of breast cancer patients treated with capecitabine, the combination of atorvastatin with polyprenol was reported to have reduced the severity of the hand-foot syndrome.[6]