Risankizumab is a biological treatment used for psoriasis, a skin disorder in which skin cells form scaly red plaques, commonly found on the elbows, knees, and lower back.

Risankizumab is an interleukin IL-23 antagonist indicated for the treatment of moderate-to-severe plaque psoriasis in adults who are candidates for systemic therapy or phototherapy [1].

Risankizumab was approved by the US Food and Drug Administration (FDA) in April 2019, in Japan in March 2019, and by the European Union in March 2019. Risankizumab has the trade name Skyrizi™ [AbbVie Inc., North Chicago, IL, USA] [1]. In January 2020, risankizumab was approved for use in Australia by the Therapeutics Goods Administration (TGA) and has been listed on the Pharmaceutical Benefits Scheme (PBS) for patients with chronic plaque psoriasis who meet the qualifying guidelines.

Risankizumab is not currently available in New Zealand. 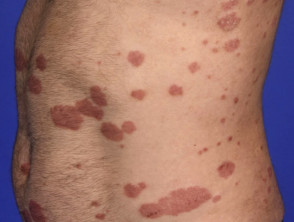 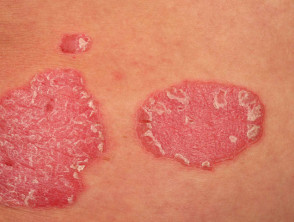 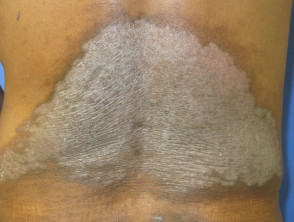 How does risankizumab work?

The proinflammatory cytokine IL-23 is thought to play a pivotal role in the pathogenesis of psoriasis by inducing and maintaining T helper (Th) 17 cells, Th22 cells, innate lymphoid cells, and the effector cytokines IL-17, IL-22, and tumour necrosis factor-alpha.

Risankizumab is one of a small group of humanised immunoglobulin G1 (IgG1) monoclonal antibodies that target IL-23, which is composed of two subunits p19 and p40 [2–4].

The drug binds to the IL-23 p19 subunit and interferes with its ability to activate and maintain psoriatic lesions. The IL-23/IL-17 axis is currently considered to be crucial in the pathogenesis of psoriasis.

The activation and upregulation of IL-17 in pre-psoriatic skin produces an inflammatory response in keratinocytes that drives the development of mature psoriatic plaques by inducing epidermal hyperplasia and epidermal proliferation [3,4].

Data suggest that selective blockade of IL-23 through the inhibition of the p19 subunit rather than p40 provides a more complete inhibition of IL-23 activity, resulting in greater efficacy in the treatment of plaque psoriasis [4–6].

How is risankizumab administered?

The recommended dose is 150 mg (two 75-mg injections) administered by subcutaneous injection at Week 0, Week 4, and every 12 weeks thereafter [7].

The injections should be administered at different anatomic locations (such as the thighs or abdomen) and not into areas where the skin is tender, bruised, erythematous, indurated, or affected by psoriasis.

The main contraindication to risankizumab is hypersensitivity to the active substance or to any of the excipients [7].

To improve the traceability of biological medicinal products, the name and the batch number of the administered risankizumab should be clearly recorded [8].

Risankizumab may increase the risk of infections by lowering the ability of the patient’s immune system to fight infections. In clinical studies, infections occurred in 22.1% of the patients treated with risankizumab, compared to 14.7% of the placebo group through to 16 weeks of treatment [7].

Treatment with risankizumab should not be started in patients with any clinically important active infection until the infection resolves or is adequately treated.

In patients with a chronic infection or a history of recurrent infection, consider the risks and benefits prior to prescribing risankizumab.

No data are available on the response to live or inactivated vaccines. Live vaccines should be avoided in patients receiving treatment with risankizumab [7].

Patients with renal or hepatic impairment

No specific studies have been conducted to determine the effect of renal or hepatic impairment on the pharmacokinetics of risankizumab [7].

In clinical trials, no overall differences in risankizumab exposure, safety, or effectiveness have been observed between older and younger subjects. In these trials, however, the number of subjects aged 65 years and older was not sufficient to determine whether they responded differently from younger subjects [7].

The safety and efficacy of risankizumab in paediatric patients less than 18 years of age has not yet been established [7].

Use of risankizumab in specific populations

There are no available data on the use of risankizumab in pregnant women to inform any drug-associated risks. IgG is known to cross the placental barrier; therefore, risankizumab may be transmitted from the mother to the developing fetus. Increased fetal loss was reported in studies in pregnant cynomolgus monkeys treated with 20 times the maximum recommended dose for humans [7].

The safety and efficacy of risankizumab in children under 18 years of age has not been established [7].

The clearance and volume of distribution of risankizumab increases and plasma concentrations decrease as body weight increases; however, no dose adjustment is recommended based on body weight [7].

What are potential drug interactions with risankizumab?

The use of live vaccines should be avoided in patients receiving treatment with risankizumab [8]. These vaccines include:

What are the possible side effects of risankizumab?

The most common adverse drug reaction that occurred in over 10% of patients receiving risankizumab in clinical trials was upper respiratory tract infections, which occurred in 13% of patients [7].

Serious infections that had an under 1% incidence of occurring as a result of an adverse drug reaction included [7]: