What are tripe palms?

Tripe palms are a very rare skin condition affecting the palms of hands and soles of feet; it is characterised by thickened skin resembling the stomach lining of some animals (tripe).

Tripe palms, also known as acanthosis palmaris or acquired pachydermatoglyphia, are frequently associated with internal malignancy. Tripe palms are a paraneoplastic dermatosis; a group of skin conditions that are caused by cancer and share the same underlying genetic basis. It often coexists with acanthosis nigricans. 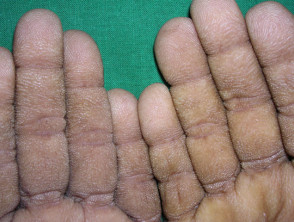 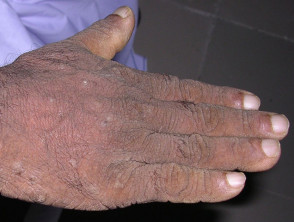 Who gets tripe palms?

There are approximately 100 cases of tripe palms reported in medical literature. It is more common in males than in females.

Approximately 90% of cases of tripe palms are associated with internal malignancy. Skin changes may precede the diagnosis of, or develop during, malignancy.

Tripe palms has also been associated with non-cancerous conditions such as:

The exact mechanism through which tripe palms develops is unknown. It is thought that the cancer cells secrete growth factors, such as epidermal growth factor-α and transforming growth factor-α, causing growth of skin cells (or more specifically keratinocytes) and hence the appearance of tripe palms.

Cancers that have frequently been associated with tripe palms include:

What are the clinical features of tripe palms?

Typically, patients with tripe palms present with thickened skin on the palms of their hands. This thickening can accentuate dermatoglyphic change which appears as a velvety pattern. The thickening often gives a yellow hue to the skin. These features are akin to the lining of the stomach, hence the skin condition being termed tripe palms. The soles of feet can also be affected.

Tripe palms can be found alongside:

How are tripe palms diagnosed?

Tripe palms are diagnosed clinically. A biopsy of the skin is not helpful in confirming the diagnosis, as the histologic findings are non-specific.

What is the differential diagnosis for tripe palms?

The clinical appearance of tripe palms can be like:

What is the treatment for tripe palms?

Patients presenting with tripe palms and without a history of cancer need to be worked up for malignancy. This includes:

The treatment of tripe palms is challenging. As tripe palms are very rare, there is limited high quality evidence to guide its management. Management with oral retinoids have helped.

What is the outcome for tripe palms?