What is wet gangrene?

Gangrene the localised death of body tissue. Wet gangrene is gangrene due to necrotising bacterial infections, including necrotising fasciitis. Wet gangrene should be distinguished from 'dry' gangrene, which is due to ischaemia.

Necrotising bacterial infections can occur via any break in the skin or internal organ. They are caused by 3 main bacterial subgroups:

Polymicrobial necrotising infections tend to affect the trunk and perineum.

Patients with these infections usually have a history of other medical problems, especially diabetes, and are likely to be older adults. The initial injury to the skin may have been unnoticed.

Gas gangrene is particularly severe and is most often due to Clostridium perfringens, which can rapidly proliferate in injured muscles. This organism is ubiquitous in soil and dust. Gas gangrene was very prevalent in World War 1, complicating 6% of open fractures and 1% of all open wounds. Clostridia release alpha, beta and other toxins, which induce blood clotting at the site of the infection and result in myonecrosis (death of muscle tissue). Reduced blood flow, localised ischaemia and lowered pH result in a favourable environment for other bacteria to grow. The gas is composed of nitrogen, oxygen, hydrogen, hydrogen sulfide and carbon dioxide. It spreads within the muscle fibres allowing rapid spread of infection.

2. Group A streptococcus and staphylococcus

Group A β-hemolytic streptococci (GAS), either alone or associated with staphylococcal species, tend to be locally aggressive and can lead to serious blood infections such as toxic shock syndrome.

Patients with streptococcal and staphylococcal infections are likely to be younger and in better general health than those with polymicrobial infections. The route of entry usually follows trauma, including surgery and intravenous drug (ab)use. M proteins produced by GAS allow the bacteria to adhere to tissue and evade the immune system. M protein can also activate T lymphocytes, which can lead to an inflammatory shock response.

Marine organisms such as Vibrio vulnificus are rare causes of gangrene and have mostly been reported in warm coastal regions. Route of infection can be through an open wound exposed to water, or via ingestion of infected oysters. Systemic toxicity tends to occur early.

Who gets necrotising bacterial infections?

Risk factors for necrotising infections include:

What are the clinical features of necrotising bacterial infections?

The clinical features of necrotising infections depend upon the location and cause.

Necrotising infections frequently resemble cellulitis or an abscess initially, but progress to discolouration (blue to black), foul-smelling discharge, and/or numbness. If the affected area is internal, symptoms may include confusion, fever, gas in the tissues under the skin, low blood pressure and persistent or severe pain.

The early signs of gangrene that should result in an urgent investigation are:

Less specific signs that should increase clinical suspicion of necrotising infection include:

Necrotising skin infections may progress rapidly to wet gangrene, unlike cellulitis or abscess. 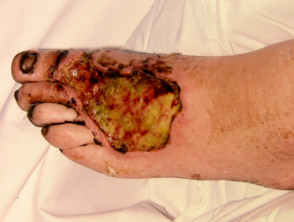 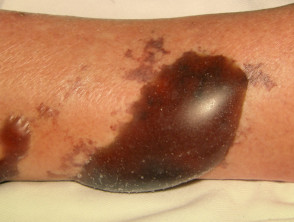 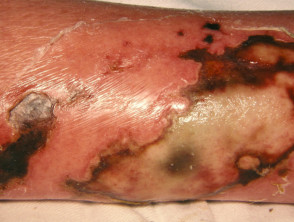 Blood cultures should be undertaken to identify specific organisms involved in the infection.

Imaging has a limited role in the diagnosis of infectious gangrene.

What is the treatment for established wet gangrene?

Treatment of gangrene depends on location and cause, but is centred around:

Management may also include:

The incidence of wartime gas gangrene has markedly reduced with identification and isolation of cases, and early debridement, amputation and supportive treatment.

What is the prognosis for wet gangrene?

Prognosis in wet gangrene depends on the extent of disease, the underlying cause and the timing of appropriate treatment.

Anaya et.al have constructed a clinical score to predict patient outcomes for infective gangrene based on several clinical criteria: