What is central centrifugal cicatricial alopecia?

Central Centrifugal Cicatricial Alopecia (CCCA) is a form of scarring alopecia on the scalp that results in permanent hair loss. It is the most common form of scarring hair loss seen in black women. However, it may be seen in men and among persons of all races and hair colour (though rarely). Middle-aged women are most commonly affected.

What is the cause of central centrifugal cicatricial alopecia?

The exact cause of CCCA is unknown and is likely multifactorial. A genetic component has been suggested, with a link to mutations of the gene PADI3, which encodes peptidyl arginine deiminase, type III (PADI3), an enzyme that modifies proteins that are essential to formation of the hair-shaft. Hair care practices, such as the use of the hot comb, relaxers, tight extensions and weaves, have been implicated for decades, but studies have not shown a consistent link. Other proposed causative factors include fungal infections, bacterial infections, autoimmune disease, and genetics. One study has shown an association with medical conditions such as type 2 diabetes mellitus.

What are the clinical features of central centrifugal cicatricial alopecia?

Hair loss typically begins at the vertex or mid-scalp and extends outward in a centrifugal manner. There is loss of the follicular openings on examination of the scalp. Thus, the scalp may appear shiny. While some persons do not have symptoms, tenderness, itch and burning are common. Hair breakage may also be an early sign of CCCA. Hair loss is slowly progressive. A photographic scale has been developed to rate the severity of the central hair loss. 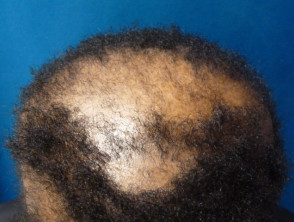 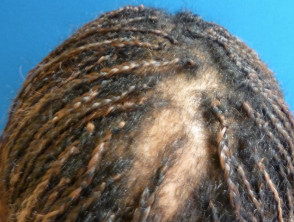 How is the diagnosis of central centrifugal cicatricial alopecia made?

Early diagnosis of CCCA is important because medical intervention can prevent further progression that often results in extensive, permanent hair loss. Diagnosis is based on clinical features, scalp biopsy and exclusion of other hair loss disorders.

Scalp biopsy should be taken from an active edge of a patch of alopecia rather than the centre of a scarred area. Histopathology reveals a lymphocytic inflammatory infiltrate (inflammatory cells) around the infundibulum (base of the hair follicle), and fibrosis (scarring). Premature desquamation (peeling) of the inner root sheath is a common feature.

The goal of therapy is to halt progression of disease and prevent further hair loss. In areas where the hair follicle has been replaced with fibrosis, regrowth is not possible. As the exact cause is not known, targeted therapy for CCCA is not available.

Treatment options for CCCA include anti-inflammatory agents such as:

Hair transplantation can be considered in individuals with well-controlled CCCA for at least one year. However, graft survival is low.

Discontinuation of traumatic hair care practices is an essential aspect of treatment of CCCA.

Women with CCCA are encouraged to consider natural hairstyles.

Hair transplantation can be considered in individuals with well-controlled CCCA that has been stable for at least one year. However, graft survival is low.