Table of contents
Introduction Introduction - melanocortin 1 receptor gene MC1R variants MC1R phenotypes Clinical features Complications Diagnosis What can I do if I have a MC1R variant?

Melanocytes make two forms of melanin in the skin, hair, and eyes.

Red hair, fair skin and freckles — the effects of phaeomelanin 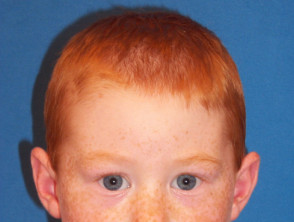 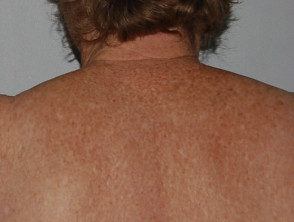 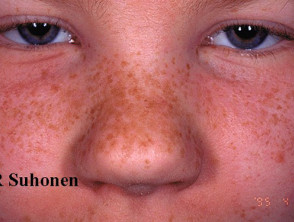 What is the melanocortin 1 receptor gene?

MC1R is maps to chromosome 16q24.3, meaning it is located on the long arm of chromosome 16, in position 24.3 near the telomere (the protective cap at the end of the chromosome that shortens with every replication) [3].

What are the variants of MC1R gene?

The MC1R gene is highly polymorphic in Caucasian populations, with more than 80 variants being described in the population [1–5]. While the exact number of people carrying the MC1R gene variants is difficult to determine globally, population-based studies have estimated that 1–2% of the population carries a variant allele for this gene. This number is very variable depending on the region and population.

In populations with North European ancestry:

A phenotype refers to the observable features related to a gene; in the case of the MC1R gene a related phenotype is hair colour.

Hair colour is an autosomal recessive trait expressed by the MC1R gene.

Not all MC1R variants are associated with red hair.

What are the clinical features of MC1R variants?

People carrying a homozygous (RR) or compound (Rr) heterozygous R allele will often have at least one of the following characteristic features:

What are the complications of MC1R variants?

MC1R germline mutations have been shown to increase the risk of cutaneous melanoma. MC1R phenotypic traits make an individual more susceptible to ultraviolet (UV) damage and melanoma may occur without excessive UV exposure. In patients with MC1R gene variants, melanoma occurs more frequently and at an earlier age at onset than in the general population.

The risk of melanoma due to MC1R mutation is moderate compared to that occurring with CDKN2A and CDK4 mutations. MC1R variants may modify CDKN2A penetrance, increasing the incidence and decreasing the age at onset of melanoma by up to 21 years, when compared to individuals with CDK2NA mutations alone [8].

Some studies have suggested individuals with at least one MC1R variant allele had a 5–15-fold increase in susceptibility to v-Raf murine sarcoma viral oncogene homolog B (BRAF) mutant melanomas [9]. This finding needs further investigation, as other studies have not found the same association.

How are MC1R variants diagnosed?

A thorough genetic pedigree can indicate whether there is a MC1R gene variant that runs in the family and its inheritance pattern. Genetic testing can be indicated if there is a strong family history of melanoma in individual with red hair and other phenotypic traits.

However, genetic testing for MC1R variants is most often undertaken for research purposes. The entire coding region is assessed through a bi-directional Sanger sequence analysis.

What can I do if I have a MC1R variant?

People likely to have MC1R variants, who have red or blonde hair, light eye colouring and freckles, should be aware that they are at increased risk of melanoma, as well as other forms of skin cancer.

People carrying the MC1R variant genes should be advised to undertake regular self-skin examination from early adult life and to undertake skin checks by a trained health professional. Watch out for pigmented and non-pigmented skin lesions with the following characteristics: