Acquired melanoyctic naevus or mole is a common benign tumour, usually appearing during childhood and adolescence. Sun exposure is a causative factor, particularly in childhood. A point mutation in the BRAF gene (most often v600E) is usually the initiating genetic mutation. Lesions evolve with age, the initial lesion being macular with nests of proliferating melanocytes confined to the dermoepidermal junction. With time, nests extend into the dermis and lesions become elevated. With further maturation junctional activity, is ceased and the naevus becomes intradermal.

Many melanocytic naevi eventually regress and the number of naevi decreases over the age of 50 years.

Classification of common acquired naevi is based primarily on the location of nests (e.g. junctional, compound, dermal or combined naevi) leading to features that are often clinically recognisable. Dermatoscopy is also useful in classifying naevi, particularly when there are atypical clinical features raising suspicion for melanoma.

Junctional naevi are usually pigmented macules on clinical examination. Histologically, proliferating melanocytes are found at the dermoepidermal junction. Cells within nests are oval or cuboidal in shape, with clear cytoplasm and variable pigmentation (figure 1). 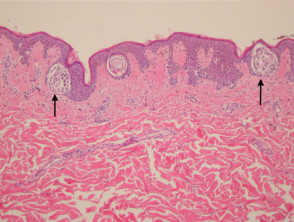 Compound melanocytic naevi have a central raised area with surrounding flat pigmentation. The epidermis may be normal in appearance, acanthotic or display seborrhoeic keratosis-like changes. Nests of melanocytes are found at the dermoepidermal junction and within the dermis. Melanocytes exhibit maturation as they become deeper and tend to be smaller with less pigmentation. (figures 2, 3). 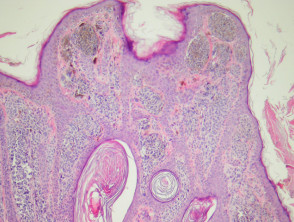 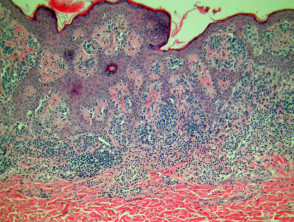 Intradermal naevi are dome-shaped, nodular or polypoid lesions that may become non-pigmented, particularly on the face. Nests of melanocytes are confined to the dermis. Melanocytes may show ‘pseudo-inclusions’, which are invaginations of cytoplasm into the nucleus giving the appearance of nuclear inclusions or cells with multiple nuclei. Deeper, the naevus cells may become spindle-shaped or ‘neurotised’. Fatty differentiation is not uncommon. Bone formation is a very rare finding in common naevi (naevus of Nanta) (figure 4). 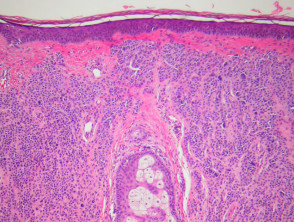 The Meyerson naevus has an eczematous halo surrounding a junctional, compound or intradermal naevus. There is a concurrent finding of subacute spongiotic dermatitis with a melanocytic naevus (figure 5). 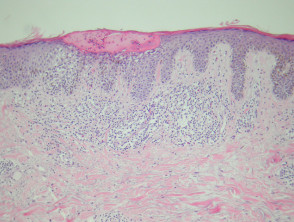 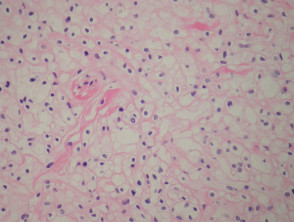 Regression may be heralded by lymphocytic destruction of naevus cells giving rise to a halo naevus. In these lesions the dermis shows dense lymphocytic infiltrates surrounding nests of melanocytes (figures 8, 9). Due to the infiltrate’s obfuscation of the melanocytic lesion, assessment of the cytology can sometimes be challenging. Clinically, there is a halo of depigmentation surrounding one or several naevi. Halo naevi may be associated with vitiligo. 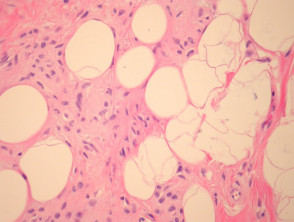 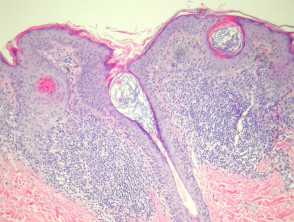 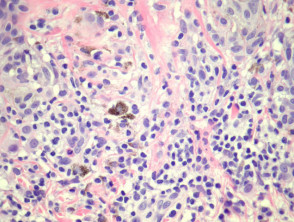 Naevi from the auricular region, breast, conjunctiva and ankle sometimes have a rather atypical proliferation of melanocytes in the epidermis, often with pagetosis and cytological atypia. Some features seen in dysplastic naevi such as lamellar fibroplasia of the superficial dermis may be noted. Clues to a benign diagnosis include clear circumscription and maturation with descent into the dermis. It is important that these lesions are not partially biopsied, as intepretation can be difficult. Partial biopsies may fail to demonstrate the reassuring features (particularly discrete lateral circumscription).

Atypical genital naevi are probably the special site naevi most frequently overdiagnosed as melanoma (figure 10). This can obviously lead to significant morbidity if mutilating surgery is performed to achieve wide margins. Superimposed lichen sclerosus on a genital naevus is a classic simulator of malignant melanoma. Clinical correlation can be very helpful in these cases. 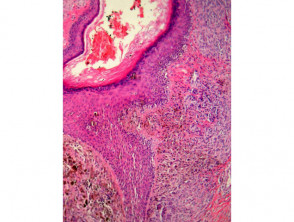 Melanocytic acral naevi often show quite marked pagetosis, sometimes to the upper levels of the epidermis, which may mimic melanoma in situ. The acronym MANIAC (Melanocytic Acral Naevi with Intraepidermal Ascent of Cells) has been applied to describe these benign naevi. A key helpful feature is the primarily nested nature of the lesion with the pagetoid foci arising above these nests rather than a diffuse lentiginous proliferation usually seen in acral melanoma. Discrete areas of melanin ‘smoke stacks’ can be seen in the stratum corneum above these nests, as opposed to diffuse corneal melanin deposition seen in melanoma. Additionally, acral naevi should show some dermal maturation if there is a dermal component (figures 11, 12). 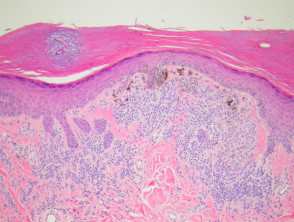 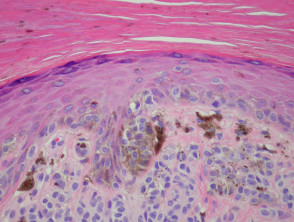 The dysplastic naevus is also called Clark naevus. It is a rather controversial entity – some authorities demand the term be expunged from the dermatopathologic lexicon. Dysplastic or Clark’s naevi are benign, often large, moles with unusual clinical and characteristic histological features. Though usually sporadic, there are familial cases (dysplastic naevus syndrome). 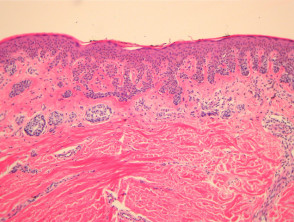 Some pathologists use the term Superficial Atypical Melanocytic Proliferation of Unknown Significance or SAMPUS to describe dysplastic melanocytic lesions in which it is difficult to exclude melanoma in situ or radial growth phase invasive melanoma. SAMPUS is often applied when a conclusive diagnosis cannot be reached. The term should ideally be avoided.

Histological changes of SAMPUS are overlapping with dysplastic naevi (lentiginous proliferation of melanocytes with cytological atypia) however, additionally there is focal pagetoid spread of single or nested melanocytes (figures 14, 15). 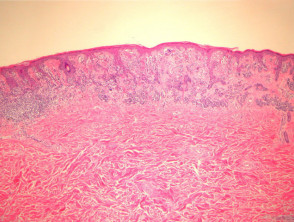 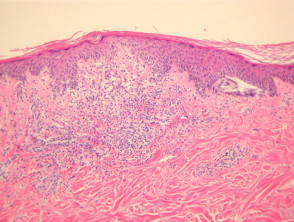 The most important differential is melanoma but other forms of melanocytic naevi such as congenital naevi, Spitz naevi, or blue naevi may need to be considered.