Seborrheic dermatitis is a common chronic relapsing inflammatory skin condition with a predilection for areas rich in sebaceous glands (i.e. the scalp, central face, and anterior chest are most affected). The disorder is characterised by scaling with poorly defined erythematous patches and plaques. Young adults are more frequently affected, and men are affected more than women.

The most frequent trichoscopic findings include: 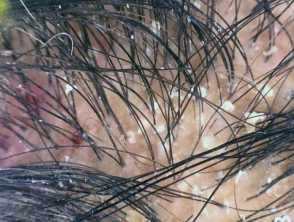 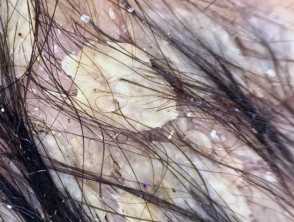 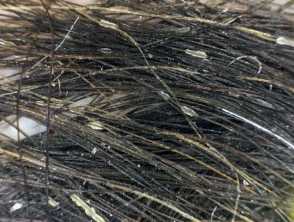 Psoriasis is a chronic inflammatory cutaneous disorder with multisystem involvement. The scalp is the most commonly affected site (50–80% of psoriasis patients) and may be the first or only disease manifestation.

Scalp psoriasis is characterised by sharply bordered, erythematous lesions covered by silver or white scales. The lesions often spread over the anterior hairline into the forehead and may also affect the retro-auricular region.

Systemic sclerosis is an autoimmune connective tissue disease. Different factors are incorporated in the pathogenesis of the disease including; small vessel vasculopathy, production of autoantibodies, and fibroblast dysfunction.

Trichoscopic examination of the forehead area