Primary cicatricial alopecias comprise a group of disorders in which there is permanent destruction of the hair follicle. This results from irreversible injury of the stem-cell-rich bulge area, which is required for the cyclic regeneration of the lower portion of the hair follicle. Histopathological examination helps in identifying the underlying disorder through the type of infiltrate surrounding the follicles, together with other pathological characteristic features.

FD manifests as recurrent follicular pustules that affect mainly the vertex and occipital area of the scalp of middle-aged males. Other clinical findings include erythema, dark yellow-gray scales, follicular hyperkeratosis, erosions, and hemorrhagic crusts, most prominent around the follicles. In advanced stages, atrophic patches with hair tufting are observed.

The above-mentioned signs are the most sensitive and specific dermoscopic findings of folliculitis decalvans. 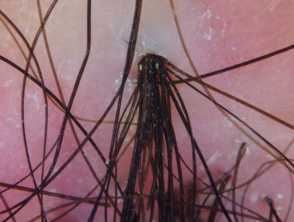 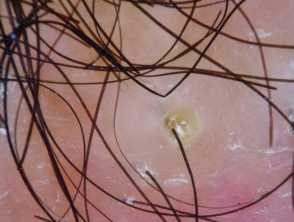 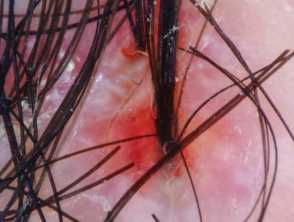 Later in the course of the disease, perifollicular pustules, nodules, and fluctuant abscesses with interconnecting sinus tracts with seropurulent discharge, tufted hairs and keloidal lesions may be present. It is considered one of the follicular occlusion tetrad, including acne conglobata, hidradenitis suppurativa, and pilonidal sinus.

In early stages, features of non-cicatricial alopecia that are found on trichoscopy include:

Late-stage features that appear on trichoscopy include:

Discoid lupus erythematosus is one of the most common causes of primary cicatricial alopecia with lymphocytic infiltrate predominance. DLE is manifested by one or more erythematous atrophic plaques of alopecia with follicular plugging, adherent scales, telangiectasia, hypo- and hyperpigmentation. End stage disease shows fibrotic, atrophic, smooth white plaques with absent follicular openings. Long-standing DLE cannot be distinguished clinically from other diseases in the spectrum of primary cicatricial alopecia. 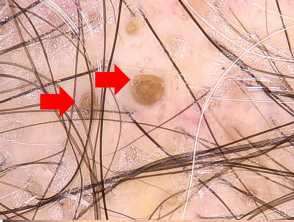 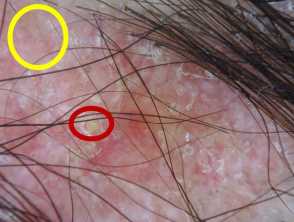 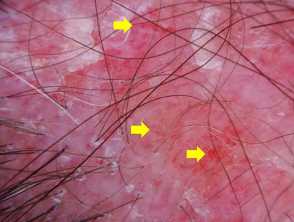 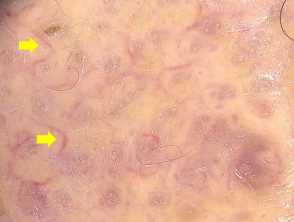 Patients with classic LPP are typically around the age of 50, and women are more often affected than men. Patients may complain of itching, burning, and scalp sensitivity. LPP is characterised by irregular atrophic patches with follicular hyperkeratosis and perifollicular erythema. The scalp in Graham Little syndrome shows lesions of classic LPP, while axillary and pubic areas show non-scarring alopecia; there is also keratosis pilaris on the trunk and extremities. Alopecia of the eyebrows may be found in some cases.

Trichoscopic features vary according to stage of the disease and the degree of activity. 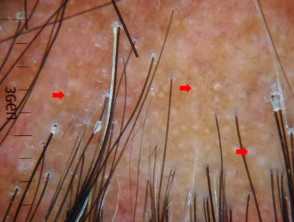 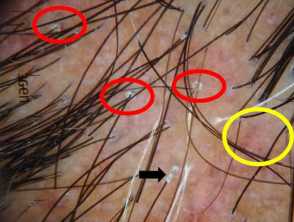 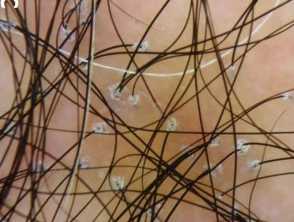 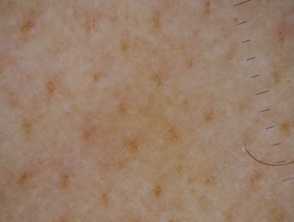 Frontal fibrosing alopecia is a primary lymphocytic cicatricial alopecia within the spectrum of lichen planopilaris; affecting mainly postmenopausal women. Frontal fibrosing alopecia is characterised by band-like alopecia affecting the frontal hairline. Follicular hyperkeratosis and perifollicular erythema can often be found in the first hairs of the hairline. Alopecia of the eyebrows is a frequent finding.

The above three features are considered characteristic signs.

Pseudopelade of Brocq is a primary cicatricial alopecia with lymphocytic infiltrate predominance. Classic pseudopelade of Brocq affects mostly women between the ages of 30 and 50 years. It usually presents with small flesh-colored alopecic patches with irregular margins, a pattern described as “footprints in the snow.”

Unlike DLE and LPP, follicular hyperkeratosis and perifollicular or diffuse erythema are mostly absent. There is a possible clinical overlap in presenting features between DLE and LPP. Clinically and dermoscopically, pseudopelade of Brocq is a diagnosis of exclusion as non-specific features are usually seen.

Many factors are incorporated in the pathogenesis of CCCA including genetic factors and hair styling practices. CCCA affects females of African descent. It is characterized by slowly progressive thinning of hair on the vertex with follicular pustules, tenderness, and sometimes pruritus.

Erosive pustular dermatosis commonly affects older individuals. It is characterized by a pustular eruption, erosions, and crusting that heal with scarring.