What is tuberous sclerosis?

Tuberous sclerosis or tuberous sclerosis complex (TSC) is a genetic disorder that is characterised by hamartomas in many organs, but particularly the skin, brain, eye, kidney and heart. Hamartomas are non-cancerous malformations composed of an overgrowth of the cells and tissues that normally occur in the affected area and include naevi (birthmarks). Tuberous sclerosis is also known as epiloia.

Skin lesions, epileptic seizures and developmental delay/behavioural problems are the main features of tuberous sclerosis complex. However, individuals with the condition may be affected in many different ways and with differing degrees of severity. Some patients may have very few, or no symptoms at all, while others may be severely affected with a multitude of symptoms.

What causes tuberous sclerosis and who gets it?

Tuberous sclerosis is a genetic disorder due to a mutation in one of two genes:

About one-third of all cases of tuberous sclerosis are inherited from an affected parent. All other cases are due to sporadic new mutations occurring in the early stages of life, most often mutations of TSC2.

People of all races and sex may be affected. The condition may become apparent any time from infancy to adulthood but usually occurs between 2-6 years of age. 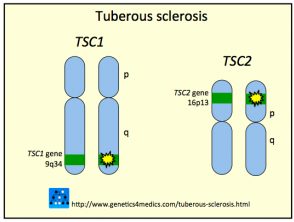 What are the skin signs of tuberous sclerosis complex?

Skin lesions are found in 60-70% of cases of tuberous sclerosis.

Epilepsy is present in about 70% of patients with tuberous sclerosis.

Other signs and symptoms of tuberous sclerosis include:

What treatment is available?

Tuberous sclerosis is a multisystem disorder, so treatment from a team of specialist doctors is usually necessary.

Skin lesions, particularly facial angiofibromas, may be psychologically distressing for some patients. Laser treatment or electrosurgery can be used to remove angiofibromas.

The topical mTOR inhibitor sirolimus 0.2% gel (also called rapamycin) has proved helpful in reducing angiofibromas in a clinical trial involving 36 adults and children. One study has also reported improvement in hypopigmented macules. A larger prospective, multicentre, randomised, double-blind, vehicle-controlled trial enrolled 179 patients with tuberous sclerosis-related facial angiofibromas and found improvement in more than 80% of patients treated with topical 1% rapamycin with most occurring in the first month. It was well tolerated [5–8].