Vogt-Koyanagi-Harada syndrome (VKH) is a multisystem disease that presents with a combination of ophthalmological, neurological, and dermatological signs and symptoms. 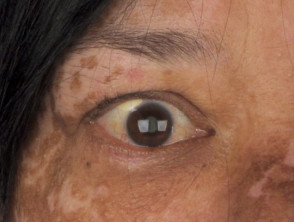 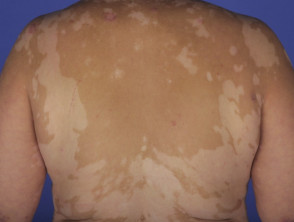 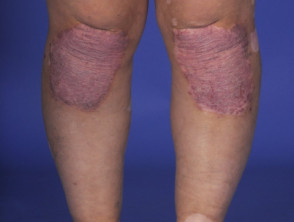 VKH is reported to have significant regional and global variation [1]. VKH is more prevalent in patients with a darker skin pigmentation than in Caucasians and people of Turkish descent. Patients with VKH are most commonly of Asian, Hispanic, Indian, Native American, or Mediterranean origin [2]. There are twice as many females affected by VKH as males [3].

VKH is mainly diagnosed in adult and middle-aged patients aged 20–50, although onset in childhood or old age has also been reported [4–6].

The exact cause of VKH is yet to be established. It is an autoimmune inflammatory condition mediated by CD4+ T cells targeting melanocytes [7,8]. Genetic predisposition and/or an unspecified exposure to a virus may be involved [1].

What are the clinical features of Vogt-Koyanagi-Harada syndrome?

Classically, VKH has four clinical stages. The clinical features vary, depending on ethnic group. Dermatological features are most often noted in the chronic convalescent stage [1].

The prodromal stage of VKH may mimic viral infection and lasts for 1–2 weeks [2]. The symptoms are mainly neurological, and include:

The acute stage of VKH affects the eye and lasts for several weeks [2].

Many patients with acute VKH go on to the chronic convalescent stage of VKH, about 3–4 months after the onset of the disease [9,10]. This usually lasts for some months or years [1,2].

25% of patients with acute VKH develop the chronic recurrent phase of the disease 6–9 months after initial presentation [1,2].

What are the dermatological findings in Vogt–Koyanagi–Harada syndrome?

About 30% of patients with VKH develop dermatological findings [12]. Vitiligo, poliosis, and alopecia areata usually occur in the chronic convalescent stage of the disease [13].

What are the complications of Vogt–Koyanagi–Harada syndrome?

Patients with VKH can develop complications that threaten or impair vision, such as:

How is Vogt-Koyanagi-Harada syndrome diagnosed?

The diagnostic criteria for VKH include inflammation of both eyes without evidence of another ocular disease, a history of trauma, or ocular surgery [17].

There are three distinct categories of the disease [17]:

What is the differential diagnosis for Vogt–Koyanagi–Harada syndrome?

Differential diagnoses for the ophthalmological signs and symptoms of the disease include:

What is the treatment for Vogt–Koyanagi–Harada syndrome?

The aim of treatment is to dampen the inflammatory response and to prevent ocular complications, such as sunset glow fundus, cataracts, glaucoma, and choroidal neovascularisation [1].

What is the outcome for Vogt–Koyanagi–Harada syndrome?

Better visual outcomes are described in those patients who undergo prompt and aggressive treatment of VKH. However, a significant proportion of patients still develop vision-impairing complications. Cataracts and glaucoma often require surgical management [1,2].

Favourable prognostic factors include good initial visual acuity and initiation of treatment in the acute rather than chronic recurrent stage of the disease [11,15,19].