Poliosis is defined as a localised patch of white hairs. It is a clinical sign rather than a diagnosis. 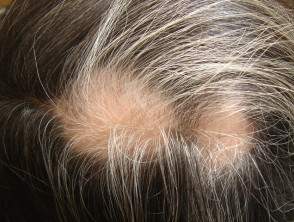 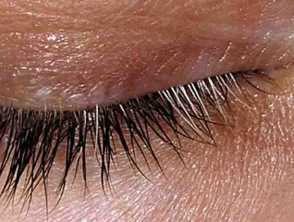 Vitiligo on the lid with poliosis of the lashes 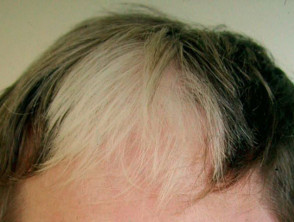 The following conditions may be associated with poliosis:

It may also follow an injury or event such as herpes zoster (shingles) or radiotherapy.

Poliosis is due to a lack of melanin (pigment) in the hair shafts of the affected area.

Poliosis may occur because of an inherited defect in melanisation, or due to destruction of the pigment cells at the base of the hair.

What are the clinical features of poliosis?

Poliosis is a localised cluster of white hair shafts most commonly described involving scalp hair, but any hairy site can be affected including eyebrows, eyelashes, beard, and body hair.

It may be associated with leukoderma or the skin may appear normal in colour. 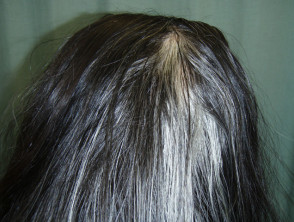 Poliosis due to halo naevus 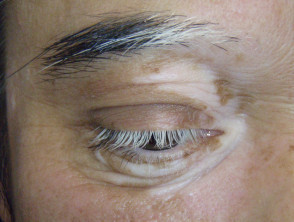 Poliosis of eyebrow and eyelashes in vitiligo 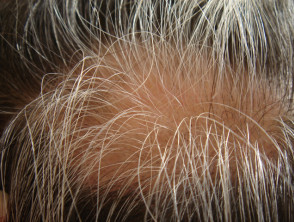 How is poliosis diagnosed?

Poliosis is a clinical diagnosis. Clinical assessment and investigations may be required to determine the cause.

Skin biopsy will show a lack of melanin and/or melanocytes in the hair bulbs. Epidermal melanocytes will be normal unless there is associated vitiligo-like leukoderma.

What is the differential diagnosis of poliosis?

What is the outlook for poliosis?

Poliosis may remain stable, but the hairs can repigment in some situations such as alopecia areata and medication-induced.