What is xeroderma pigmentosum?

Xeroderma pigmentosum (XP) is a very rare skin disorder where a person is highly sensitive to sunlight, has premature skin ageing and is prone to developing skin cancers. 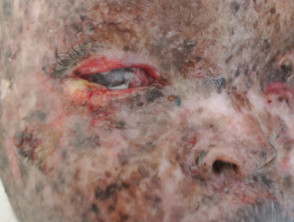 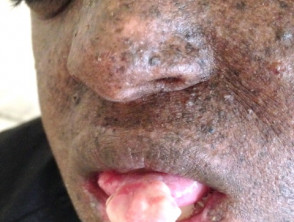 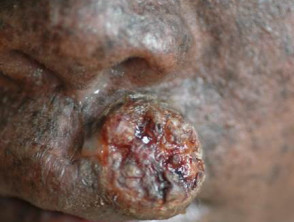 The signs and symptoms of xeroderma pigmentosum are a result of an impaired nucleotide excision repair (NER) system. Two types of NER have been identified:

At least seven different gene abnormalities or complementation groups have been described in different families (XPA to XPG) resulting in varying disease severity.

In addition to the genetic abnormality, the immunosuppressive effects of exposure to ultraviolet radiation (UV) contribute to the disease, for example by depleting Langerhans cells from the epidermis.

Who gets xeroderma pigmentosum?

Xeroderma pigmentosum occurs worldwide and affects men and women of all races. XPA is shown to be more common in Japan than elsewhere.

What are the symptoms of xeroderma pigmentosum?

The disease usually progresses through 3 stages. The first stage occurs around 6 months after birth (skin appears normal at birth).

Continued sun exposure will lead to the second stage, which is characterised by:

The third stage is the development of actinic keratoses and skin cancers. These may occur as early as age 4–5 years and a mean of 8 years. They are more prevalent in sun-exposed areas such as the face. They include:

Neurological problems occur in about 20% of xeroderma pigmentosum patients.

How is xeroderma pigmentosum diagnosed?

Usually, xeroderma pigmentosum is detected in early infancy, around 1–2 years.

A child presenting with severe sunburn after their first exposure to sun may be a clue to the diagnosis of xeroderma pigmentosum. Xeroderma pigmentosum can usually be conclusively diagnosed by measuring the DNA repair factor from skin or blood samples.

What is the treatment for xeroderma pigmentosum?

The main goal of treatment is protection from UV from the sun and unshielded fluorescent lamps (sun avoidance).

Patients should undergo frequent skin examinations by someone who has been taught to recognise signs of skin cancer. Any suspicious spots or growths should be immediately reported to the doctor.

Some patients with xeroderma pigmentosum patients may be prescribed isotretinoin. This is a vitamin A derivative that may prevent the formation of new cancers by altering keratinocyte differentiation.

What is the outcome of xeroderma pigmentosum?

Many patients with xeroderma pigmentosum die at an early age from skin cancers. However, if a person is diagnosed early, does not have severe neurological symptoms or has a mild variant, and takes all the precautionary measures to avoid exposure to UV light, they may survive beyond middle age.