Why have a new classification?

The conventional system has divided melanocytic naevi according to history (congenital or acquired) and histopathology (junctional, compound and dermal location of melanocytes). However clinical diagnosis is often imprecise. Historically, naevi were thought to start as junctional melanocytic nests, and progress to become compound then dermal in time. Careful dermoscopic observation of numerous naevi has shown this theory to be implausible.

Dermoscopy often allows precise diagnosis of different types of melanocytic naevi based on the amount and distribution of pigmentation. Often an individual has many benign naevi that look similar to one another, allowing the ugly duckling that looks different from the others to be recognised as a melanoma.

The new classification has seven groups. Clinicians may wish to use it when describing dermoscopic features of melanocytic naevi.

The globular naevus is characterised dermoscopically by a globular pattern. These lesions are present at birth or arise in childhood, and are likely to be constitutionally predetermined. They persist lifelong.

The reticular naevus is characterised dermoscopically by a reticular or network pattern of pigmentation. They arise during childhood and adult life, most likely triggered by sun exposure or other factors. They have a tendency to regress in later life and may disappear.

The starburst (Spitz/Reed) naevus has two distinct dermoscopic patterns. These lesions are uncommon, and may arise in children or young adults. Changing lesions may be difficult to distinguish from melanoma, and should be excised.

The blue naevus is dermoscopically characterised by homogenous steel blue colour. Blue naevi may be congenital or acquired and are persistent.

Naevi on palms and soles/nails, and naevi on the face, genitals and nipples have particular dermoscopic features.

This category comprises atypical or non-diagnostic lesions, which are often clinically or dermoscopically suspicious of melanoma but are not malignant on histology. They may be superficial or nodular. 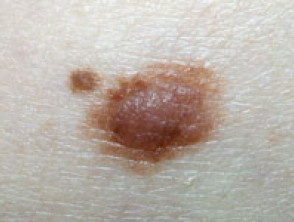 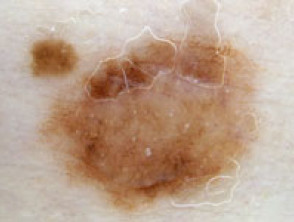 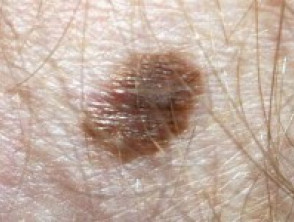 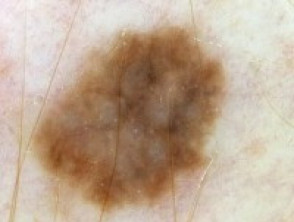 Classify the next fifty naevi you examine.

Dermoscopy of the nail