What is an epidermal naevus?

An epidermal naevus is due to an overgrowth of the epidermis. Lesions are present at birth (50%) or develop during childhood (mostly in the first year of life). The abnormality arises from a defect in the ectoderm, the outer layer of the embryo that gives rise to epidermis and neural tissue.

When another component of the skin is predominant, the lesion is called an organoid naevus.

What causes an epidermal naevus?

There are two copies of every gene, one derived from the individual's mother and the other from their father. It is thought that there are two populations of skin cells, containing either the mother's genes or the father's genes (mosaicism). If one of these populations of skin cells is abnormal, it may result in a localised area of thickened skin, an epidermal naevus. Epidermal naevi very rarely affect more than one member of the family. Mutations have been detected in FGFR3, PIK3CA and HRAS.

Epidermal naevi are distributed along the lines of Blashko. These lines are the tracks taken by groups of genetically identical cells in the developing embryo. Skin cells that have the active abnormal gene spread out to form the epidermal naevus, whereas the remaining skin cells form the other areas of apparently normal skin.

What are the features of epidermal naevus?

An epidermal naevus usually arises on the trunk and limbs and is uncommon on the face or scalp. The majority are linear epidermal naevi — they form a line, usually just on one side of the body (unilateral, also known as naevus unis lateralis). When they first appear at birth or in infancy, they are flat tan or brown marks, but as the child ages, they become thickened and often warty. The naevus may also become more extensive for a few years.

Systematised epidermal naevi are less common and are sometimes known as ichthyosis hystrix. There are multiple lesions that usually arise in a swirled pattern, arising on one or both sides of the body. In some patients, there are also other congenital abnormalities, particularly of the skeleton and central nervous system (ENS). 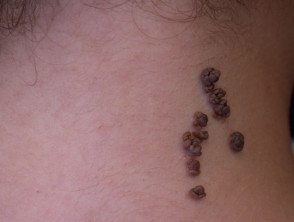 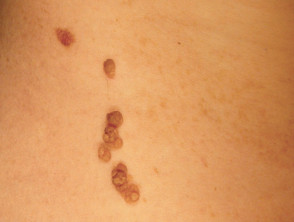 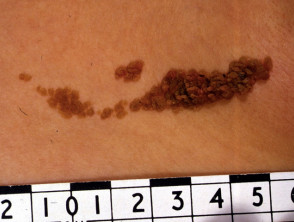 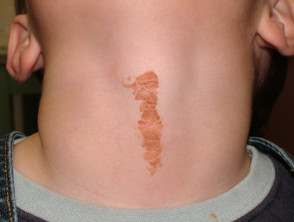 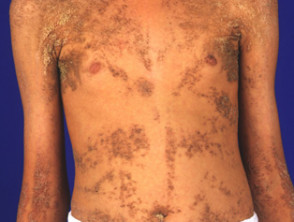 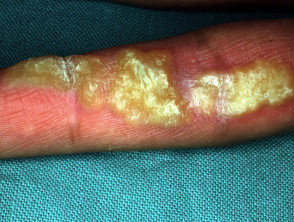 The epidermal naevus syndromes refer to the association of a keratinocytic or organoid epidermal naevus with abnormalities in other organ systems derived from the embryonic ectoderm. These syndromes may involve the eyes, bones or nervous system. Many specific syndromes have been described.

The defect causing the skin lesions may also result in disorders of other internal organs such as the brain, eyes and skeleton. When multiple organs are involved the condition is referred to as an epidermal naevus syndrome (ENS).

Most epidermal naevi remain unchanged in adulthood and do not cause any problems.

What is the differential diagnosis for epidermal naevus?

The organoid naevi are characterised by benign overgrowths of the epidermal appendage structures.

What is the treatment for epidermal naevi?

There is no real effective medical treatment for epidermal naevi. Topical calcipotriol may reduce the thickness of the skin in some cases. If necessary, laser or surgical removal of naevi may be performed.