What is IgA pemphigus?

IgA pemphigus (or immunoglobulin A pemphigus) is an autoimmune blistering disorder. It is also called intercellular IgA dermatosis among other names.

However, a new classification describes five subtypes of IgA pemphigus; these being:

Who gets IgA pemphigus?

IgA pemphigus is very rare. It can occur in any age group, but is more commonly seen in middle aged adults and may have a female predominance.

What are the clinical features of IgA pemphigus? 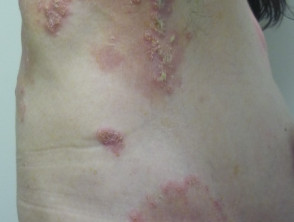 What is the cause of IgA pemphigus?

The exact cause of IgA pemphigus is unclear.

What is the differential diagnosis for IgA pemphigus?

Other conditions that should be considered in the differential diagnosis include:

How is IgA pemphigus diagnosed?

A blistering autoimmune disease or autoinflammatory pustular disease may be suspected clinically from the clinical features, often after the eruption has failed to clear with antibiotics.

The diagnosis of IgA pemphigus requires a skin biopsy for histology and direct immunofluorescent testing.

What is the treatment for IgA pemphigus?

IgA pemphigus is usually treated with a combination of systemic steroids (anti-inflammatory effects) and dapsone which is thought to reduce neutrophil infiltration. This combination treatment is more effective than the use of steroids alone.

Since few cases of IgA pemphigus have been described, the most effective treatment is unknown. Other medications worth considering include:

In comparison to other forms of pemphigus, IgA pemphigus presents with a milder disease and carries a better prognosis. When managed appropriately, it mostly heals with no scarring.

Patients should be counselled about potential side effects of steroids and dapsone. IgA associated with other medical conditions should be managed in a multidisciplinary manner, hence it is important to thoroughly investigate potential underlying triggers/associations, especially in elderly patients.