What are the main hazards to the skin of the marine environment?

Hazards from the marine environment include injuries, poisonous stings and secondary infection. These may result in severe pain, illness and even death.

Cuts and scratches are common among fishermen, swimmers and surfers.

The main culprits are coelenterates, mollusca, echinoderms and poisonous fish.

The two most important mollusca are octopus and cone shell.

Venomous fish include some species of stingrays and Scorpaenidae. There are many different species in the Scorpaenidae family. They vary in the size of their spines and the potency of the venom released through these spines. These include:

Jellyfish commonly have stinging nematocysts. They are sometimes known simply as sea nettles, though often this name is reserved for the less dangerous varieties. Structurally jellyfish comprise a bell-shaped body with tentacles, some up to 30 metres in length. The nematocysts or cnidoblasts reside within theses tentacles. Stings are delivered when contact is made with the tentacles and nematocysts discharge into the skin. 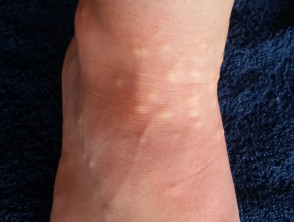 Jellyfish are most prevalent in calm warm seawater, sandy beaches and harbours during the summer months. However, they are also seen in other circumstances.

The first symptom is of pain, often so severe as to lead to loss of consciousness. Some victims of the box jellyfish are unable to make it to the beach alive. Other symptoms include:

Depending on the amount of stinging and the type of jellyfish encountered, shock and cardiac arrest can follow.

After recovering from the initial sting, the wound may later blister and become necrotic (tissue death).

If you or a companion is stung by a jellyfish:

Do not rub with a towel or use fresh water as this may cause further damage by causing further nematocyst discharge. Contrary to popular belief urine and alcohol can exacerbate injury and are not recommended.

Coral cuts and abrasions are common and may become infected. Coral may also harbour stinging nematocysts.

Treatment of coral wounds involves removing visible debris and cleaning the wound thoroughly and applying antiseptic or antibiotic cream as infection is common (watch out for redness, fever, foul smell or pus).

Most species of octopus are harmless, except for the blue-ringed octopus largely found around the coast of Australia. This is identified by iridescent blue rings that appear on its body when disturbed. Large quantities of its venom may cause paralysis but mortality is rare.

Treatment is supportive, and the wound should be irrigated heavily. Artificial ventilation may be required in cases of paralysis.

The cone shell is a carnivore, living just beneath the sandy surface of shallow and deep water areas. Eighteen species of cone shell may sting humans, via a lightening-fast barb injection. The toxins target an array of ion channels, which cause paralysis in small creatures. Human fatalities are rare. Typically the sting results in local pain and numbness, and may be accompanied by general malaise.

Treatment of cone shell stings may include:

No antivenin is available for cone shell stings.

The sea urchin is an echinoderm. It is a common source of puncture wounds because the individual often inadvertently steps on it. Local irritation is caused by embedded spines, which are often hidden by pigment release in the skin. Sea urchins are usually non-venomous, though some are capable of delivering toxin.

Treatment should be directed at removing as many visible spines as possible.

An injury from a venomous fish results in very painful and inflamed puncture site. The venom of a stingray is found at the base of its tail.

Complications of an injury from venomous fish may include:

Treatment of injury by venomous fish

Secondary bacterial infection is common after penetrating or abrasive marine injuries. Signs of secondary infection include redness, swelling and warmth.