What is Marjolin ulcer?

A Marjolin ulcer is the rare development of cutaneous squamous cell carcinoma (SCC) in the site of a scar or ulcer. It most commonly forms at the site of an old thermal burn scar. However, Marjolin ulcers may also form from osteomyelitic lesions and, rarely, venous ulcers, pressure sores, surgical scars, animal bites, and vaccination scars [1]. 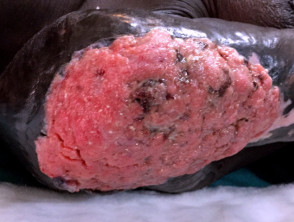 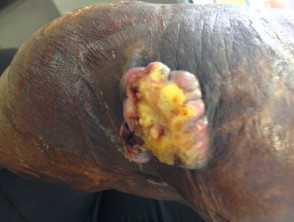 Who gets Marjolin ulcers?

Marjolin ulcers occur on average around 30 years after an injury to the skin that results in a scar or an ulcer (range 10–75 years) [2]. Rarely, an acute Marjolin ulcer may develop between 6 weeks and 1 year of injury. It is estimated that around 2% of thermal burns scars and 0.7% of osteomyelitic lesions develop into Marjolin ulcers [3].

Marjolin ulcer can affect people of all ages, most commonly between 40 and 60 years of age. Men are 2–3 times more likely be diagnosed with Marjolin ulcer than women [4]. All races and skin types can develop Marjolin ulcers.

The most common sites for Marjolin ulcers are the legs and feet. The ulcers can also form on the head and neck [1].

The exact reason why Marjolin ulcers develop is unknown. Most theories suggest that injury and scar formation lead to destruction of the local blood and lymphatic vessels, making the area an immune-privileged site. This protects the scar from anti-tumour antibodies and permits the transformation and malignant degeneration of the skin. Chronic inflammation, irritation or trauma to the area are also thought to contribute to the process [2].

What are the clinical features of Marjolin ulcer?

Marjolin ulcer usually presents as a non-healing sore. It may steadily increase in size, have excessive granulation tissue, foul-smelling pus, bleed easily on contact, and be painful [5].

On examination, Marjolin ulcers are usually flat and indurated (hardened), with elevated margins. A less common, less aggressive type of Marjolin ulcer is slow-growing, and presents as an exophytic, papillary ulcer, which grows outward with finger-like projections [3, 6].

How is Marjolin ulcer diagnosed?

A Marjolin ulcer should be suspected when an ulcer persists for more than 3 months at the site of a scar [2].

Diagnosis is by incisional biopsy of suspicious areas of the ulcer. Cancerous change is detected on histological examination of the specimen. This may require a multidisciplinary approach, as Marjolin ulcer can be misdiagnosed as pseudoepitheliomatous hyperplasia [7].

Magnetic resonance imaging (MRI) may be performed to assess the degree of soft tissue and bone involvement [8].

What is the differential diagnosis for Marjolin ulcer?

Differential diagnoses for Marjolin ulcer include ulcers or skin cancers resulting from other conditions. These include:

What is the treatment for Marjolin ulcer?

Marjolin ulcer is usually treated by wide local excision [2]. Patients with aggressive cancer may have sentinel lymph node biopsy. Lesions that involve the bone require amputation. Mohs surgery can also be undertaken, though this is uncommon due to the time, expense and expertise required [9].

Radiotherapy and chemotherapy have not been shown to be effective in treating Marjolin ulcers. However, radiotherapy may be used for palliation in cases where surgery is not possible or refused [3].

What is the outcome for Marjolin ulcer?

Marjolin ulcers are staged as other cutaneous SCCs, using the TNM (tumour, node, metastasis) classification system. This depends on the size of the lesion and how far it has metastasised to the lymph nodes and other organs. Prognosis depends most strongly on whether the cancer has already spread to lymph nodes [11].