What is nodular melanoma?

Nodular melanoma is an invasive form of melanoma. Melanoma is a potentially dangerous skin cancer that arises from pigment cells (melanocytes).

According to New Zealand Cancer Registry data, 2256 invasive melanomas were diagnosed in 2008, and at least 15% were reported as nodular melanoma. There were 371 deaths from all types of melanoma in 2008 (69% were male) and about half of these were nodular melanomas.

What is nodular melanoma?

In nodular melanoma, melanoma cells proliferate downwards through the skin – this is known as vertical growth. The lesion presents as a nodule (lump) that has been rapidly enlarging over the previous weeks to months. It can arise de novo in normal-appearing skin, or within an existing melanoma of another type.

Nodular melanoma can penetrate deep within the skin within a few months of its first appearance.

Who gets nodular melanoma?

Nodular melanoma accounts for about 15% of melanoma in Australia and New Zealand. Although more common in very fair skin (skin phototype 1 and 2), it may also occur in those who tan quite easily (phototype 3), and occasionally in brown or black skin (phototype 4-6).

Nodular melanoma is more common in males than in females. Most are over the age of 50 when it is diagnosed.

The main risk factors for nodular melanoma are:

It is less strongly associated with sun exposure than superficial spreading and lentigo maligna types of melanoma.

Nodular melanoma may arise on any site but is most common on exposed areas of the head and neck. 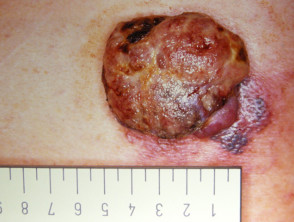 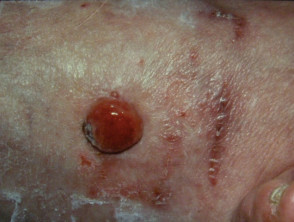 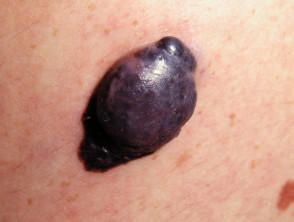 What is the cause of nodular melanoma?

Nodular melanoma is due to the development of malignant pigment cells (melanocytes) along with the basal layer of the epidermis. These cells may occasionally arise from an existing melanocytic naevus (about 3%) but commonly occur within another type of melanoma or in previously normal-appearing skin. What triggers the melanocytes to become malignant is unknown, but it is likely to be a series of changes to the DNA. NRAS mutations are often found in patients with nodular melanomas.

What tests should be done if I have nodular melanoma?

It is essential to diagnose nodular melanoma accurately. Clinical diagnosis is aided by dermoscopy and skin biopsy (usually excision biopsy). Those with melanoma that is more than 1 mm thick may be advised to have lymph node biopsy, imaging studies and blood tests.

Dermoscopy, or the use of a dermatoscope, by a dermatologist or other doctor trained in its use, can be very helpful in distinguishing nodular melanoma from other skin lesions, such as:

The most frequently observed dermoscopic features of nodular melanoma are:

Diagnostic excision of a lesion suspicious of nodular melanoma

If the skin lesion is suspected to be a nodular melanoma, it should be urgently cut out (excision biopsy). A small biopsy is best avoided, except in unusually large lesions. An incisional or punch biopsy could be misleading.

The pathological diagnosis of melanoma can be challenging. Nodular melanomas have little or no spread of malignant cells within the epidermis; the melanoma cells are found within the dermis or subcutaneous fat. Extra tests using immunohistochemical stains may be necessary.

The report may also include comments about the cell type and its growth pattern, invasion of blood vessels or nerves, inflammatory response, regression, and whether there is an associated naevus (original mole).

The deeper the Clark level, the greater the risk of metastasis (secondary spread). It is useful in predicting outcome in thin tumours and less useful for thicker ones in comparison to the value of the Breslow thickness.

What is the treatment for nodular melanoma?

The initial treatment of primary melanoma is to cut it out; the lesion should be completely excised with a 2-3 cm margin of normal tissue. Further treatment depends mainly on the Breslow thickness of the lesion.

After initial excision biopsy; the radial excision margins, measured clinically from the edge of the melanoma, recommended in The Australian and New Zealand Guidelines for the Management of Melanoma (2008) are shown in the table below. This may necessitate a flap or graft to close the wound. Occasionally, the pathologist will report incomplete excision of the melanoma, despite wide margins. This means further surgery or radiotherapy will be recommended to ensure the tumour has been completely removed.

If the local lymph nodes are enlarged due to metastatic melanoma, they should be removed entirely. This requires a surgical procedure, usually under general anaesthetic. If they are not enlarged, they may be tested to see if there is any microscopic spread of melanoma. The test is known as a sentinel node biopsy.

If the melanoma is widespread, other forms of treatment may be necessary but are not always successful in eradicating cancer. Immunotherapy, biologics such as ipilimumab, and the BRAF inhibitors dabrafenib and vemurafenib are showing promise.

What happens at follow-up of melanoma?

The primary purpose of follow-up is to detect recurrences early, but it also offers an opportunity to diagnose a new primary melanoma at the first possible opportunity. A second invasive melanoma occurs in 5-10% patients; an unrelated melanoma in situ affects in more than 20% of melanoma patients.

The follow-up appointments may be undertaken by the patient's general practitioner or specialist, or they may be shared.

Tests are not typically worthwhile for stage 1/2 melanoma patients unless there are signs or symptoms of disease recurrence or metastasis. And no tests are thought necessary for healthy patients who have remained well for five years or longer after removal of their melanoma, whatever stage.

What is the outlook for patients with nodular melanoma?

The risk of spread and ultimate death from invasive melanoma depends on several factors, but the main one is the measured thickness of the melanoma at the time it was surgically removed.

The Melanoma Guidelines report that metastases are rare for melanomas <0.75mm and the risk for tumours 0.75–1 mm thick is about 5%. The risk steadily increases with thickness so that melanomas >4 mm have a chance of metastasis of about 40%.