What is lentiginous melanoma?

Lentiginous melanoma is a slowly progressive variant of melanoma found on sun-damaged skin of the trunk and limbs.

Lentiginous melanoma is usually diagnosed when the malignant cells are in situ and it is thought to have a low risk of invasive melanoma. This type of melanoma has only recently been classified as distinct from superficial spreading melanoma and lentigo maligna (melanoma).

Who gets lentiginous melanoma?

The risk of lentiginous melanoma relates to sun damage. Thus lentiginous melanoma is more common in outdoor workers, in older people and in association with solar damage and non-melanoma skin cancer. Although often occurring in those with very fair skin (skin phototype 1 and 2), it may also occur in those who tan quite easily (phototype 3). It is rare in brown or black skin (phototype 4–6).

Lentiginous melanoma has been more common in males than females in most reports. The majority of patients with lentigo maligna are older than 40 years, and the peak age of diagnosis is be between 60 and 80 years.

Unlike superficial spreading melanoma, lentigo maligna is not related to the number of melanocytic naevi (moles) or atypical naevi.

Lentiginous melanoma presents as a slowly growing or changing patch of discoloured skin. At first, it often resembles common freckles or brown marks (lentigines). It becomes more distinctive in time, often growing to several centimetres over several years or even decades. Like other flat forms of melanoma, it can be recognised by the ABCDE rule: Asymmetry, Border irregularity, Colour variation, large Diameter and Evolving.

The characteristics of lentiginous melanoma include: 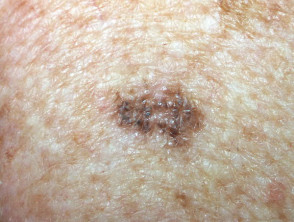 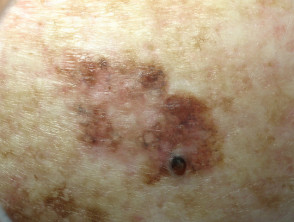 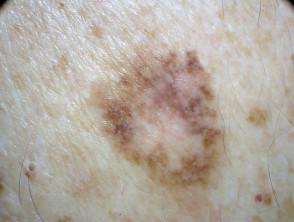 The following features are very suspicious of invasive melanoma.

What is the cause of lentiginous melanoma?

Lentiginous melanoma is a proliferation of malignant pigment cells (melanocytes) along the basal layer of the epidermis. The precursor lesion is an atypical solar lentigo or a lentiginous / junctional naevus. What triggers the cells to become malignant is unknown but genetic mutations may start within primitive stem cells.

It is essential to diagnose lentiginous melanoma accurately. Clinical diagnosis is aided by dermoscopy and in some centres, by confocal microscopy.

Other tests are not necessary in the majority of patients but those with invasive melanoma that is more than 1 mm thick may be advised to have imaging studies, lymph node biopsy and blood tests.

New tests are being developed to determine specific genetic mutations with lentiginous melanoma, which may inform future targeted therapy.

If a skin lesion is clinically suspicious of lentigo maligna, it is best cut out (excision biopsy) with a 2–3 mm margin. Partial biopsy is less accurate than complete excision biopsy, as a single small biopsy could miss a malignant focus.

The pathological diagnosis of melanoma and its precursors can be very difficult. Some lesions clinically typical of lentiginous melanoma are reported to only show nests of junctional melanocytes, others have the criteria to diagnose in-situ melanoma, and a few show invasive cancer.

The histological features of lentiginous melanoma include epidermal hyperplasia (as in solar lentigo), focal junctional nests of atypical melanocytes and may include pagetoid spread (single melanocytes within upper areas of epidermis). Lentiginous melanoma can be difficult to distinguish from atypical lentiginous junctional naevus, in which architectural and cytological atypia is less severe and pagetoid spread is absent.

The report may also include comments about the cell type and its growth pattern, invasion of blood vessels or nerves, inflammatory response, regression and whether there is associated in-situ disease.

The deeper the Clark level, the greater the risk of metastasis (secondary spread). It is useful in predicting outcome in thin tumours, and less useful for thicker ones in comparison to the value of the Breslow thickness.

What is the treatment for lentiginous melanoma?

Lentiginous melanoma should undergo surgical excision. This means cutting it out and repairing the defect. This may be by simply closing the wound and stitching it up but when this is difficult, it may be necessary to create a flap or skin graft. These latter procedures may be delayed for a few days while waiting for the histopathology report to confirm the melanoma has been fully removed.

A second procedure is often arranged to remove a margin of healthy tissue based on whether it remains in situ (5–10 mm) or whether it has become invasive (10–20 mm or more).

Lentiginous melanoma in situ is not dangerous; it only becomes potentially life threatening if an invasive melanoma develops within it.

Long term follow-up involves reviewing the treated area and full skin examination to identify new lesions of concern. If the lesion was invasive, regional lymph nodes should also be examined. It may be prudent to biopsy any lesion arising within or close to the excision site.

The risk of spread (metastatic melanoma) from invasive melanoma depends on several factors, but the main one is the thickness of the melanoma at the time it was surgically removed.

The Australian and New Zealand Melanoma Guidelines (2008) report that metastases are rare for melanomas < 0.75 mm in thickness, and the risk for tumours 0.75–1 mm thick is about 5%. The risk steadily increases with thickness so that melanomas > 4 mm result in a 10-year survival of around 50%, according to the American Joint Committee on Cancer (AJCC) statistics.