What is desmoplastic melanoma?

Desmoplastic melanoma is a rare form of invasive melanoma, a skin cancer that arises from pigment cells (melanocytes). 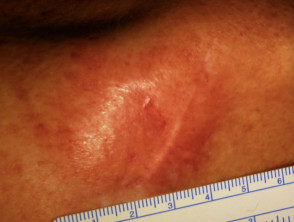 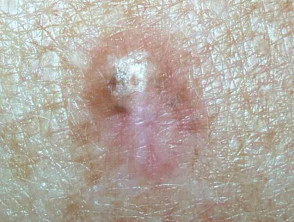 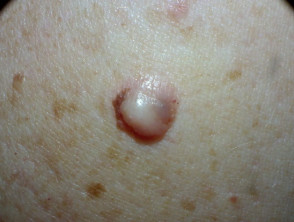 Who gets desmoplastic melanoma?

Desmoplastic melanoma accounts for about 1% of melanoma in Australia and New Zealand.

The main risk factors for desmoplastic melanoma are:

What are the clinical features of desmoplastic melanoma?

It presents as a slowly enlarging area of thickened skin, sometimes described as scar-like. It is often skin coloured but may be pigmented. ­It becomes more distinctive in time, often growing over months to years before it is recognised. Features include:

What is the differential diagnosis of desmoplastic melanoma?

Not uncommonly, desmoplastic melanoma can be mistaken for other benign lesions, such as:

What is the cause of desmoplastic melanoma?

Desmoplastic melanoma is due to the development of malignant pigment cells (melanocytes) within the dermis. These cells may arise within another type of melanoma or in previously normal-appearing skin. What triggers the melanocytes to become malignant is unknown, but it is likely to be a series of changes to DNA.

It is essential to diagnose desmoplastic melanoma accurately. A careful clinical history is important, which includes noting previous treatments received for non-resolving lesions. Palpation is an important step, as a large majority of desmoplastic melanoma are indurated. Clinical diagnosis is aided by dermoscopy and skin biopsy (usually excision biopsy). Depending on the thickness and proportion of desmoplasia within the invasive melanoma, sentinel lymph node biopsy, imaging studies and blood tests may be advised.

If the skin lesion is suspicious of desmoplastic melanoma, it should be urgently cut out (excision biopsy).

The pathological diagnosis of melanoma can be very difficult. Histopathological features of desmoplastic melanoma include:

Immunohistochemical stains for melanoma may be helpful.

The report may also include comments about the cell type and its growth pattern, invasion of blood vessels or nerves, inflammatory response, regression and whether there is an associated naevus or another form of melanoma.

Desmoplastic melanoma is categorised into either ‘pure’ or ‘mixed’ subtypes, which reflect the extent of desmoplasia. The mixed subtypes include a component of spindle cell melanoma.

The Breslow thickness is reported for invasive melanomas. It is measured vertically in millimetres from the top of the granular layer (or base of superficial ulceration) to the deepest point of tumour involvement. In most melanomas, it is a strong predictor of outcome; the thicker the melanoma, the more likely it is to metastasise.

The Clark level indicates the anatomic plane of invasion. The deeper the Clark level, the greater the risk of metastasis (secondary spread). It is not considered useful in predicting outcome in desmoplastic melanoma.

What is the treatment for desmoplastic melanoma?

The initial treatment of a desmoplastic melanoma is surgical excision.

Most melanoma specialists refer to the American Joint Committee on Cancer (AJCC) cutaneous melanoma staging guidelines (8th Edition). The same staging criteria are used in all melanomas, irrespective of their growth pattern.

Stage 4 — Distant metastases have been detected

Desmoplastic melanoma has a high mutational load, which may increase the chance of response to immunotherapy with anti-PD-1/PD-1L medications such as pembrolizumab or nivolumab.

The main purpose of follow-up is to detect recurrences early, but it also offers an opportunity to diagnose a new primary melanoma at the first possible opportunity.

Tests are not typically worthwhile for Stage 1 or Stage 2 melanoma patients unless there are signs or symptoms of disease recurrence or metastasis. No routine tests are necessary for healthy patients who have remained well for five years or longer after removal of their melanoma, whatever stage.

The risk of spread and ultimate death from invasive melanoma depends on several factors, but the main one is the measured thickness of the melanoma at the time it was surgically removed. There are conflicting reports about prognostic indicators and outcomes for desmoplastic melanoma, due to its rarity, differences in pathological interpretation, and differing study designs/methodology. The results of the three studies are described below.