Onychogryphosis, also known as ram’s horn nail, is a nail disorder resulting from slow nail plate growth. It is characterised by an opaque, yellow-brown thickening of the nail plate with elongation and increased curvature [1,2]. 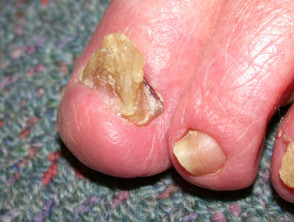 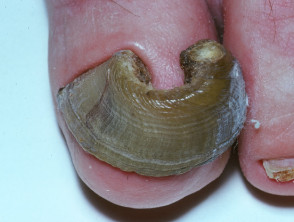 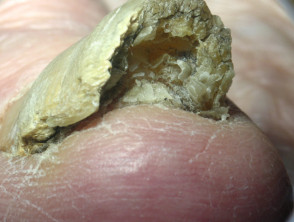 Acquired onychogryphosis is more common [1]. It is more often observed in older people, people with poor personal care, and patients with senile dementia [1–3].

The exact cause of onychogryphosis is not completely known.

It is associated with:

In onychogryphosis, the nail plate becomes hypertrophied and uneven at the proximal matrix (the nail growth plate). The direction of the deformity is determined by which side grows faster, whether due to an insufficiency of the nail matrix under the proximal nail fold or because the nail bed produces a greater quantity of keratin than normal [1].

What are the clinical features of onychogryphosis?

The clinical features of onychogryphosis include:

What are the complications of onychogryphosis?

The complications of onychogryphosis may include:

How is onychogryphosis diagnosed?

Onychogryphosis is diagnosed clinically based on its characteristic appearance [1]. In the early stages, it may be difficult to recognise, as the only feature is hypertrophy of the nail plate, and the classical features usually appear in the later stages [1].

On histology, the keratinocytes appear disorderly and there is associated hyperchromatism, parakeratosis, and numerous splits [1].

What is the differential diagnosis for onychogryphosis?

The differential diagnosis for onychogryphosis includes:

What is the treatment for onychogryphosis?

Treatment for onychogryphosis can be either conservative or operative, depending on its cause and symptoms [1].

Excessive pressure or microtrauma to the nail bed can be minimised by selecting properly fitted footwear [1].

If conservative treatment fails, nail avulsion may be considered followed by ablative or excisional matricectomy (surgically or chemically removing the proximal nail matrix at the base of the nail) [1].

The Zadik technique or a V–Y advancement flap can be used to completely remove the nail matrix [1]. The Syme method, whereby half of the terminal phalanx is removed with the nail fold, is rarely used [1].

What is the outcome for onychogryphosis?

Onychogryphosis tends to recur after conservative treatment [1]. For both clinical and cosmetic purposes, treatment can be repeated to keep the nail bed short and prevent secondary complications. The use of proper footwear to prevent excessive nail pressure on the nail bed is important.