What is parakeratosis pustulosa?

Parakeratosis pustulosa describes a deformed fingernail or toenail surrounded by red, often scaly skin. It usually affects the thumb or index fingernail of young children, but occasionally involves another digit including a toenail. It is three times more common in girls.

It often starts with reddening of the skin under the free margin of the thumb or index finger nail. The redness later extends down to the nail fold resulting in swelling and loss of the cuticle. Thickened skin pushes up and deforms the nail plate.

Parakeratosis pustulosa is not itchy, but it may be a little painful.

The cause is unclear.

The following signs may be seen.

These signs make it hard to distinguish from other skin conditions such as psoriasis and atopic dermatitis so although common, it is often misdiagnosed.

Other conditions that may appear similar include tinea pedis and tinea unguium, paronychia, acrodermatitis continua of Hallopeau and other types of hand dermatitis. 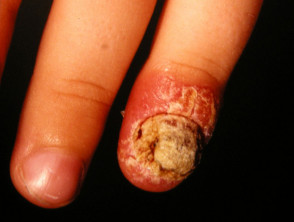 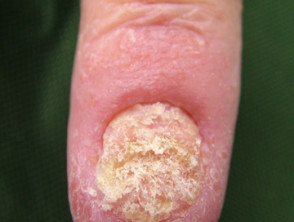 Parakeratosis pustulosa is a clinical diagnosis, so investigations are performed to rule out other nail conditions.

No specific therapy is used for parakeratosis pustulosa. The following have occasionally been found useful.