Rifampicin is an antibiotic used to treat serious bacterial infections. It may be prescribed by dermatologists for the treatment of:

What infections does rifampicin treat?

It is also used to treat brucellosis, for serious staphylococcal infections, and to clear asymptomatic carriers of Neisseria meningiditis (which can cause meningococcal disease).

How is rifampicin prescribed?

In New Zealand rifampicin is available as:

Rifampicin is often prescribed with another antibiotic in order to prevent bacterial resistance, which can develop rapidly if it is used alone.

It should be taken on an empty stomach at least 30 minutes before a meal or 2 hours after a meal. Antacids should be given at least 1 hour after rifampicin.

What are the side effects of rifampicin?

Rifampicin is usually well-tolerated and rarely causes serious toxicity. The commonest side effects involve the skin and the gastrointestinal system.

Discoloured urine while on rifampicin 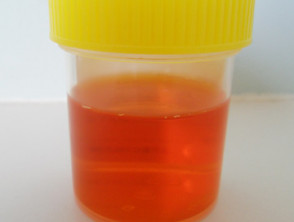 Tears, sweat and urine may become orange coloured by oral rifampicin. Contact lenses may be permanently stained. This effect is usually mild and self-limiting.

Rifampicin may cause flushing and itching, with or without rash. Other cutaneous reactions reported are:

Rifampicin may cause loss of appetite, vomiting, abdominal pain and diarrhoea.

Hepatitis can be caused by rifampicin, particularly if rifampicin is given with isoniazid.

Serious haematological disorders have been reported in patients taking rifampicin, including:

Muscle weakness and myopathy are uncommon side effects of rifampicin.

Rifampicin is sometimes used intermittently (less than 2 to 3 doses per week) for the treatment of tuberculosis and leprosy. When rifampicin is used in this way, it may be associated with a ‘flu-like syndrome, shortness of breath, low blood pressure, acute renal failure and shock.

Rifampicin is a P-glycoprotein inducer and may increase the breakdown of other medications, making them less effective. The dosage of these drugs may need adjustment if they are taken together with rifampicin:

Precautions that should be taken when on rifampicin