Skin prick testing is an allergy test used to identify allergens responsible for triggering symptoms in allergic diseases. Whilst patch testing is a useful diagnostic test for patients with allergic contact dermatitis, skin prick testing is useful in the diagnosis of other allergies such as aeroallergens causing hay fever, food allergy, latex allergy, drug allergy, and bee and wasp venom allergy.

Skin prick testing with a battery of routine allergens is an important basic procedure in diagnosing allergic diseases. It is simple, carries low risk and is inexpensive to perform.

Skin prick testing is most often used to demonstrate atopy. Atopy is characterised by an overactive immune response to environmental factors and has a strong genetic component. It usually manifests clinically as one or more of the characteristic disorders of asthma, eczema, or hay fever (rhinitis). The results from skin prick tests can be used to guide the management of patients with asthma and hay fever, for example, to paln desensitisation to a certain allergen, removal of a family pet, removal of carpets, and avoidance of certain foods. It is also useful in patients with bee and wasp stings, and acute urticaria, especially if immunotherapy is being considered.

Overall, skin prick tests can provide confirmatory evidence for a diagnosis made on the patient's history and clinical condition.

Skin prick tests are usually performed on the inner forearm. Any number of allergens can be tested, as few as 3 or 4 or up to about 25 allergens. The following is a brief overview of how the test is performed.

Reactions are assessed by the degree of redness and swelling and the size of the weal produced. The weal has a white, raised edge that surrounds the swollen red central area of any skin reaction. It usually takes about 15-20 minutes to reach a maximum size and thereafter fades over a few hours. 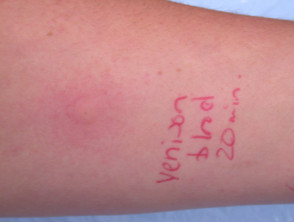 For skin prick tests to be informative, they must be interpreted in conjunction with the patient's history and physical examination. The doctor must also be aware of the many reasons for a false-positive and false-negative reaction to properly interpret test results.

One of the common errors in skin prick testing is placing the tests too close together (< 2 cm apart) so that spreading of allergen solutions between test sites occurs.

There are many reasons that cause a false-positive or false-negative skin prick test result.

Causes of a false-positive result

Causes of a false-negative result

Some people are surprised by negative test reactions when they have been fairly sure a particular plant has caused their symptoms. This may be because they are allergic to another material. For example, privet is commonly blamed for hay fever, but in fact is a rare cause. Instead, symptoms may be caused by ryegrass, which flowers at the same time as privet. In other instances, rhinitis is due to irritants such as pine pollen, not allergens.