What are the rickettsial diseases?

Rickettsia are small, obligate intracellular, Gram-negative bacteria that spend part of their life cycle in an arthropod host (eg, a tick, flea, body louse, or mite). Humans are infected with the rickettsial organism either via a bite or contact with faeces from an infected arthropod. The disease that develops depends upon the specific bacterium transmitted. There are many different bacterial species classified within the rickettsial group and diverse clinical manifestations are seen that vary greatly in terms of severity. The majority of rickettsial diseases result in a rash and some will also result in a cutaneous eschar, aiding diagnosis. 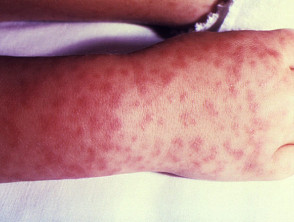 Who gets rickettsial spotted fevers?

Some of the most common rickettsial spotted fevers are listed below but many others exist. There are at least 14 species transmitted by ticks, one by mites and one by fleas.

RMSF is a moderate to severe infection, featuring a widespread maculopapular rash that becomes petechial and purpuric with areas of necrosis. Abdominal pain, myalgia, and necrosis are also seen. The complications of RMSF include multisystem involvement, encephalitis, renal failure, amputation secondary to necrosis, hearing loss, and nerve damage. There is a significant mortality risk (up to 30%).

African tick typhus is caused by Rickettsia africae and distributed throughout Sub-Saharan Africa and the West Indies. Cattle are the main hosts for ticks (Amblyomma spp.) carrying the infection. African tick typhus most commonly occurs in the November–April period.

African tick typhus is typically asymptomatic or mild in severity with a maculopapular or vesicular rash. Unusually, its eschars are often multiple and there may be clusters of people affected at the same time.

The complications of African tick typhus include prolonged fever and reactive arthritis. The mortality risk is very low.

Boutonneuse fever (also known as Mediterranean spotted [or tick] fever) is caused by Rickettsia conorii and is spread via tick (Rhipicephalus sanguineus) to rodents and dogs, its main animal hosts. It occurs throughout Southern Europe, Africa, Southern Russia, and Southern Asia and is most common between May–September period.

Boutonneuse fever is mild in severity, with a macular then maculopapular rash, and its mortality risk is low.

Rickettsialpox (also known as Kew Gardens spotted fever and vesicular rickettsiosis) is caused by Rickettsia akari and spread to via house mouse mite (Liponyssoides sanguineus) to rodents. It occurs in the USA, South Africa, the Balkan states, and the Ukraine (mainly in urban locations) and often arises after the extermination of infected rodents as the mites seek new hosts.

Rickettsialpox is typically asymptomatic or mild, with a sparse papulovesicular rash. However, central nervous system features have been reported, such as a stiff neck and photophobia. The mortality risk with Rickettsialpox is very low.

Flea-borne spotted fever is caused by Rickettsia felis and is transmitted to its animal hosts, cats, dogs, and rodents, by cat fleas (Ctenocephalides felis) worldwide.

Flea-borne spotted fever is probably mild in severity, with a generalised maculopapular rash. Its unusual features include emergent disease (only discovered in last 20 years); its cases being poorly characterised and currently under-appreciated.

The mortality risk for flea-borne spotted fever is probably low.

What are the clinical features of rickettsial spotted fevers?

The classical triad of symptoms in all rickettsial diseases is:

What are the complications of rickettsial spotted fevers?

The severity of the rickettsial spotted fevers varies considerably. The complications seen include:

How are rickettsial spotted fevers diagnosed?

The diagnosis of spotted fever group rickettsial disease is based on the clinical presentation and risk factors for exposure to ticks or mites. Laboratory confirmation can be difficult and includes:

What is the differential diagnosis for rickettsial spotted fevers?

The differential diagnosis includes any disease causing rash, fever, and headache. These include:

The differential diagnosis for an eschar includes:

What is the treatment for rickettsial spotted fevers?

No vaccines exist for rickettsial infections.

Rickettsial infections can be prevented by taking measures to reduce exposure to ticks and mites. These measures include:

What is the outcome of rickettsial spotted fevers?

The outcome very much depends on the type of spotted fever. RMSF is a serious and potentially life-threatening disease. The possible sequelae from RMSF include amputation due to necrosis, hearing loss, paralysis, and mental disability.

The other spotted fevers are generally much milder and, in some cases, patients may be asymptomatic.