What is scrub typhus?

Scrub typhus is a disease caused by infection from the Rickettsia bacteria, Orientia tsutsugamushi.

Humans are infected via the bite of an infected chigger — the larval form of the trombiculid mite of the genus Leptotrombidium.

Scrub typhus in the axilla 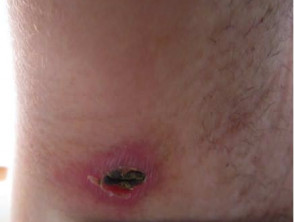 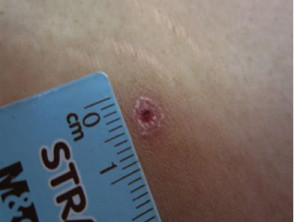 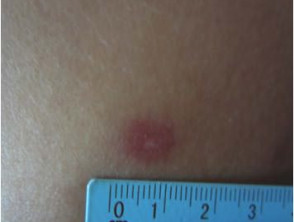 Who gets scrub typhus?

Scrub typhus traditionally occurs in people living in Asia, Japan, India, northern Australia and the Pacific Islands. However, there are increasing reports from elsewhere in the world, including recently in Chile [1].

Classification and causes of scrub typhus 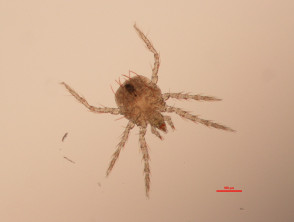 What is the habitat of the trombiculid mite?

Trombiculid mites inhabit a wide range of habitats, including primary forest, plantations, beaches and gardens. They are closely associated with small mammals, particularly rodents, on whom larval mites feed in order to complete their life cycle.

Areas of scrub typhus infected mites are patchily distributed. The dynamics and extent of these mite islands are not well understood, and anyone exposed to suitable mite habitats could be at risk of becoming infected. Humans are likely to be accidental hosts.

What are the clinical features of scrub typhus?

Scrub typhus results in a classic triad of fever, myalgia, and headache.

Symptoms usually start within 6–14 days of being bitten. In most cases, a cutaneous eschar develops at the site of inoculation. Lymphadenopathy is common, and a maculopapular rash may occur on the trunk (exanthem). Plantar and palmar erythema are also well described.

What are the complications of scrub typhus?

The illness may be mild but systemic involvement can occur, resulting in:

How is scrub typhus diagnosed?

Laboratory diagnosis of scrub typhus is difficult. A variety of diagnostic tests may be used, including:

What is the differential diagnosis for scrub typhus?

The differential diagnosis for scrub typhus includes any infectious disease causing fever, myalgia, and headache, such as:

The differential diagnosis for the eschar of scrub typhus includes:

What is the treatment for scrub typhus?

Scrub typhus is usually responsive to tetracycline antibiotics, especially doxycycline. A 7-day course is usually adequate unless the disease is severe. Resistance to tetracyclines was reported from Northern Thailand, but further published data is lacking [2].

Chloramphenicol is the second-line treatment option.

Scrub typhus can be prevented by taking measures to avoid being bitten by larval trombiculid mites, such as:

What is the outcome after scrub typhus?

The mortality associated with scrub typhus may be as high as 60% in untreated cases. However, with appropriate and timely treatment, scrub typhus symptoms should start to improve within 48 hours and the patient should be completely recovered in 7–10 days.

Immunity seems to be short-lived and strain-specific, so previous infection with scrub typhus does not confer resistance to future infection.