Dengue, or dengue fever, is a viral illness transmitted by the bite of any of dengue viruses. Patients with dengue usually present with fever, headache, rash, nausea, vomiting, aches and pains.

In some cases, dengue can progress to a severe form named severe dengue (previously known as dengue haemorrhagic fever), characterised by plasma leakage with or without haemorrhage. Severe haemorrhage or severe organ impairment can occur, with or without shock features [1].

Dengue rash with islands of sparing Exanthem with islands of sparing 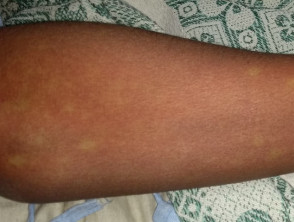 Several hundred years ago, dengue virus probably shifted from a mosquito-monkey-mosquito cycle of transmission to becoming endemic in humans.

There are an estimated 400 million infections in more than 100 countries around the world every year, especially in tropical areas.

Children, the elderly and immunosuppressed individuals tend to be more prone to have atypical or severe forms of dengue virus infection. Severe dengue was first recognised in the 1950s during dengue epidemics in the Philippines and Thailand, but it is now reported worldwide.

The global spread and increasing severity of dengue were enabled by:

Dengue virus belongs to the family of Flavivirus, the same family of viruses including yellow fever and zika. They are also called arboviruses, because are transmitted by arthropod bites  (in the case of dengue by the Aedes mosquitoes, especially Aedes aegypti). Dengue viruses (DENV) are small, spherical, single-stranded enveloped RNA viruses with four distinct viral serotypes, DENV 1–4.

Once a person becomes infected, the virus is carried and multiplies in the blood, serving as a source of the virus for uninfected mosquitoes. Patients who are already infected with the dengue virus can transmit the infection via mosquitoes after the first symptoms appear until a maximum of two weeks later [1,2].

What are the clinical features of dengue?

A person infected by the dengue virus develops severe flu-like symptoms. The clinical features of dengue fever vary according to the characteristics of the infected individual. Symptoms usually last for 2–7 days, after an incubation period of 4–10 days after the bite from an infected mosquito [1,3].

In 2009, WHO re-classified dengue infections as dengue fever and divided it into three groups [1].

Probable dengue fever: fever (usually up to 40°C) plus two of the following:

Dengue fever with warning signs:  dengue fever plus at least one of the following:

Severe dengue: dengue fever plus at least one of the following:

What are the complications of dengue?

The most feared complication of dengue is its severe form. Major bleeding, profound shock, multiple organ failure and brain or heart damage can usually lead to death when present. This is fortunately uncommon [1].

How is dengue diagnosed?

Dengue infection is diagnosed by testing blood samples during the first 5 days of symptoms and/or early recovery phase (more than 5 days of symptoms) confirming the presence of the virus. The diagnosis can also be confirmed by:

What is the differential diagnosis for dengue?

This can be infectious (mostly) or non-infectious conditions.

What is the treatment of dengue?

There is no specific treatment for dengue fever. Patients should seek medical advice, rest and drink plenty of fluids.

In the case of severe dengue, the patient should be admitted to hospital for maintenance of the patient's circulating fluid volume and management of haemorrhagic complications.

What is the outcome for dengue?

After recovery from dengue fever, the person develops lifelong immunity against that particular dengue virus serotype but confers only partial and transient protection against the other three serotypes of the virus.

Sequential infections seem to increase the risk of developing severe dengue. The person with non-complicated dengue fever recovers without any residual problem [1].

There is ongoing research about medications and vaccines against dengue virus, and also for reduction and/or elimination of Aedes mosquitoes [1,6].

Mosquito breeding sites should be eliminated or controlled. The dengue virus-carrying mosquito often breeds in artificial containers and receptacles containing water. The following measures can be taken to reduce the breeding of mosquitoes.

People should avoid being bitten by mosquitoes.