What is staphylococcal scalded skin syndrome?

Staphylococcal scalded skin syndrome (SSSS) is a rare, severe, superficial blistering skin disorder which is characterised by the detachment of the outermost skin layer (epidermis). This is triggered by exotoxin release from specific strains of Staphylococcus aureus bacteria.

The blistering of large areas of skin gives the appearance of a burn or scalding, hence the name staphylococcal scalded skin syndrome. SSSS is often used interchangeably with the eponymous name Ritter von Ritterschein disease (Ritter disease), particularly when it presents in newborn children. 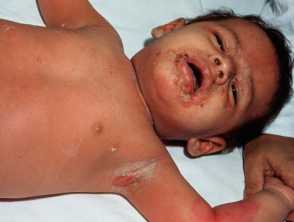 Superficial blistering over the axillae, face and chest due to staphylococcal scalded skin syndrome 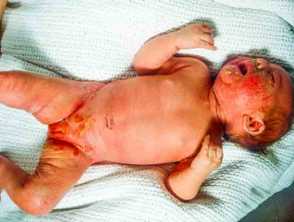 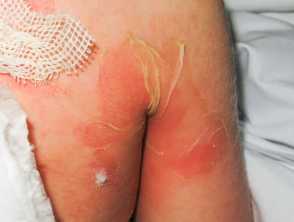 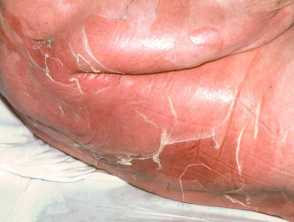 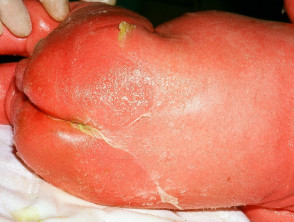 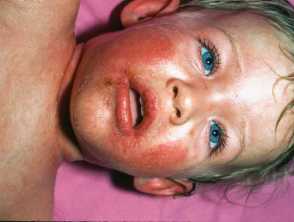 Erythema, scaling and crusting in an infant with staphylococcal scalded skin syndrome

Who gets staphylococcal scalded skin syndrome?

SSSS is predominantly seen in children younger than 5 years with a peak age being reported between 2 to 3 years of age. The higher incidence in this age group is thought to be a consequence of an immature:

Although rare, cases have been reported in older children and adults, and would characteristically involve those who are immunosuppressed or have severe renal impairment/chronic renal disease.

The estimated prevalence of SSSS based on studies undertaken in Europe has been reported to range from 0.09 to 0.56 cases per million people, with an equal male to female ratio seen in children.

SSSS starts from a localised infection caused by toxigenic Staphylococcus aureus (approximately 5% of strains). The following then occurs:

Depending on disease severity, the resultant effect can range from a localised area of skin loss to total body blistering and sloughing. Desmoglein-1 is absent from mucosal epithelium, which explains why mucosae are unaffected in SSSS.

The initial localised infection often starts from sites such as the ears, eyes (conjunctiva) or throat, especially in children, or infected wounds. These toxins then spread to the skin via the circulating blood and target the desmoglein-1 protein in the epidermis leading to the blistering and sloughing typified by the condition.

What are the clinical features of staphylococcal scalded skin syndrome?

SSSS tends to start with nonspecific symptoms in children; this may include irritability, lethargy, and fever. Within 24–48 hours, a painful widespread red rash develops on the skin followed by the formation of large, fragile, fluid-filled blisters (bullae). These can rupture easily leaving tender patches of skin that look like a burn.

There is typically no mucous membrane involvement in SSSS, which helps to distinguish it from toxic epidermal necrolysis (TEN), where mucosal changes are usual.

Erythema in the initial phase of SSSS is less easily appreciated in skin or colour.

What are the complications of staphylococcal scalded skin syndrome?

Despite the alarming appearance, children who contract SSSS generally experience complete recovery within two weeks if diagnosed and treated promptly. However, if left untreated or treatment is unsuccessful, a number of complications can occur. These are typically due to the loss of the protective skin barrier, which include:

A history and physical examination are often sufficient for diagnosis. Tests that may be used include:

What is the differential diagnosis for staphylococcal scalded skin syndrome?

What is the treatment for staphylococcal scalded skin syndrome?

SSSS is considered a dermatological emergency which requires hospitalisation and prompt treatment. This usually involves:

If there is a good response, oral antibiotics can be substituted within several days. The patient may then be discharged from hospital to continue treatment at home.

Supportive treatments for SSSS include:

Despite the initial alarming appearance of SSSS, children often make an excellent recovery with complete healing usually occurring within 5–7 days of starting treatment.

How do you prevent staphylococcal scalded skin syndrome?

If there is an outbreak of SSSS in either a neonatal care unit or childcare facility, the possibility of a staphylococcal carrier in the vicinity should be investigated. Identification of the healthcare worker, childcare worker, parent or visitor colonised or infected with Staphylococcus aureus is key to managing the problem. Once identified these individuals should be treated with oral antibiotics to eradicate the causative organism. To prevent further infections these places should employ strict hand washing with antibacterial soap or sanitisers.

What is the outcome of staphylococcal scalded skin syndrome?

Despite the alarming appearance, children who contract SSSS generally experience complete recovery within two weeks if diagnosed and treated promptly. However, if left untreated or treatment is unsuccessful, a number of complications can occur (see above).

Mortality is low in children (1–5%) but much higher in adults (50–60%); due to underlying comorbidities.