What is Costello syndrome?

Costello syndrome is a RASopathy. it results from a paternal-origin heterozygous germline mutation of the HRAS gene present on chromosome 11p15.5. The mutations are restricted to a narrow spectrum on the p.Gly12Ser residue of HRAS. HRAS normally controls cellular differentiation and function.

Costello syndrome typically results from a de novo mutation so there is no family history of the disorder. Men and women are affected equally [1–8]. 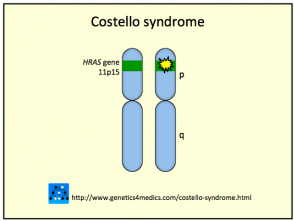 What are the clinical features of Costello syndrome?

The symptoms of Costello syndrome evolve over a period of time and developmental delay is common. The key clinical features are:

Perinatal features may include:

Hyperpigmentation of skin with deep creases and loose skin on the hands and feet should raise the clinical suspicion of Costello syndrome during infancy. Other features that can occur throughout the patient's life can include: 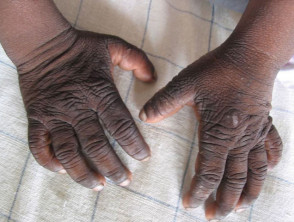 What are the dermatological manifestations of Costello syndrome?

The main dermatological manifestations of Costello syndrome can include:

Changes to the hair in Costello syndrome can include:

Alopecia may be seen but this is a more common feature in cardiofaciocutaneous syndrome. Hair loss with skin changes gives a prematurely aged appearance in adults.

Generalised hyperpigmentation of skin is seen in a third of individuals; acanthosis nigricans is also reported in a third of the affected population with velvety plaques occuring on the neck and flexural areas, and sometimes on the posterior earlobes — these can be verrucous in older individuals.

An oral examination for gingival hypertrophy and mucocutaneous lip papules is important, as these are both distinct features of Costello syndrome.

Over half of individuals with Costello syndrome do not like sun exposure or are extremely photosensitive, and three-quarters of affected individuals report heat intolerance.

How is Costello syndrome diagnosed?

Prenatal diagnosis is suspected from the phenotypic features, and antenatal confirmative HRAS mutation testing has been reported.

Postnatal diagnosis is confirmed by identifying the HRAS mutations. Over 80% of affected individuals have mutations affecting the p.Gly12Ser residue and, less commonly, p.Gly12A. Rare mutations associated with either a mild or severe phenotype have been described.

Routine chromosomal microarray and karyotype testing may be non-diagnostic [1–13].

What is the differential diagnosis for Costello syndrome?

Overgrowth syndromes, such as Beckwith–Wiedemann syndrome and Simpson–Golabi–Behmel syndrome, with macrosomia and hypoglycaemia may be confused with Costello syndrome in the neonatal period.

Congenital myopathy syndromes with hypotonia may also be mistaken for Costello syndrome.

What is the risk of cancer in Costello syndrome?

Some somatic mutations in the HRAS gene predispose individuals with Costello syndrome to an increased risk of neoplasms, with a 15% lifetime risk of developing malignant tumours. There is a high risk of developing rhabdomyosarcoma (cancer in the muscles attached to the bones), neuroblastoma (cancer of the nerve tissues), or transitional cell carcinoma of the bladder during childhood and adolescence [1–13].

What is the treatment for Costello syndrome?

There is no cure for Costello syndrome. However, there are recommended general supportive measures for managing the syndrome. These include:

Genetic counselling should be offered to all the families with affected children so that they may understand the risk of Costello syndrome in future pregnancies. The risks of neoplasms and the need for surveillance should be discussed. Affected individuals do not go on to have children, but there would be a 50% chance of having affected progeny if they were to reproduce [1–13].