Lobomycosis is a rare, chronic, fungal infection of the skin and subcutaneous tissue.

Lobomycosis, also referred to as keloidal blastomycosis, Jorge Lobo disease, Lobo disease, or lacaziosis, is a deep mycosis of the skin. It is characterised by keloidal skin lesions that often remain well-localised. 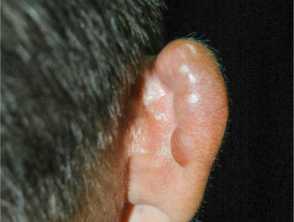 Keloid like nodules on the ear due to lobomycosis 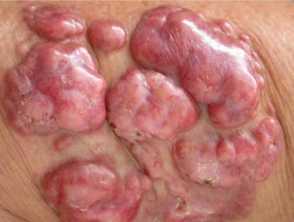 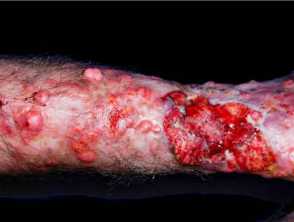 Nodules and ulcers due to lobomycosis on the leg

Lobomycosis primarily occurs in the tropical climates of Central and South America, and most commonly presents in rural communities in countries such as Brazil, Venezuela, Colombia, and Guyana.

Lobomycosis is caused by Lacazia loboi. The organism is an uncultivable dimorphic onygenales fungus that is found in water, soil, and vegetation. It is thought that traumatic implantation of the fungus into the dermis is the most likely mode of transmission. Lobomycosis does not appear to spread through human-to-human transmission.

What are the clinical features of lobomycosis?

Often after several months, an indurated painless papule develops in the superficial or deep dermis. Over subsequent months to years, the area of involvement expands contiguously, with the development of single or multiple polymorphic plaques or nodules that resemble keloid scars. These cutaneous lesions often have a smooth, shiny and intact surface and their colour can vary from skin colour to darker red-brown. Telangiectasia may also be present.

These lesions may be found anywhere, but are usually found on exposed parts (ie, arms, legs, pinna, and face). Patients do not typically experience pruritus or dysesthesia, however, these may be present in extensive cases.

What are the complications of lobomycosis?

The diagnosis is made on clinical suspicion and direct microscopic examination. Skin biopsy is the gold standard for diagnostic confirmation; visualisation of the fungal forms are best obtained with the use of silver or periodic acid-Schiff (PAS) stain. 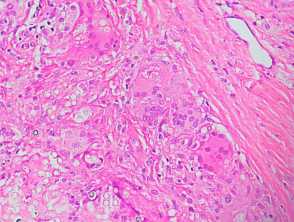 Granulomatous inflammation with giant cells and asteroid body due to lobomycosis 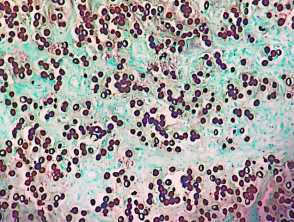 What is the differential diagnosis for lobomycosis?

What is the treatment for lobomycosis?

What is the outcome of lobomycosis?

Lobomycosis has a slow and progressive involvement of the skin and subcutaneous tissue. Extensive or chronic disease can lead to tissue destruction and disfigurement. It is very rare for the disease to resolve spontaneously. There have been some cases of patients developing squamous cell carcinoma in chronic lesions.