Malaria and its skin signs

Malaria is a blood-borne tropical infection caused by parasitic protozoa of the genus Plasmodium transmitted between people via infected female Anopheles mosquitoes.

Malaria only occurs in the 91 tropical and subtropical countries where the Anopheles mosquitoes can survive, multiply, and complete their growth cycle. Disease incidence within these countries further depends on environmental factors including altitude, climate, and vegetation. In 2016, the World Health Organisation (WHO) estimated 90% of malaria cases in the world occurred in sub-Saharan Africa, but other regions at risk included South-East Asia, Central and South America, and parts of the Middle East. The WHO World Malaria Report for 2019 estimated 229 million cases and 409,000 deaths in that year. 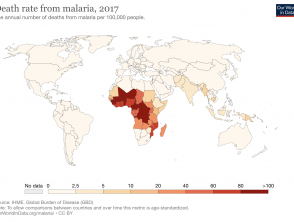 Children under 5, pregnant women, and the immunosuppressed are at the highest risk of contracting malaria.

As malaria is a blood-borne disease, it is possible to contract it from blood transfusions and the sharing of needles, but this is rare.

Malaria is caused by just four of the many species of Plasmodium protozoa. These are:

The Plasmodium protozoa are spread by the female Anopheles mosquito which bites between dusk and dawn. The mosquito deposits the protozoa in the intervascular skin matrix, from where the microorganisms invade the bloodstream and rapidly establish infection in the liver. The parasites mature and multiply in the liver over several days before entering red blood cells for their final growth phase. The infected red cells burst open to release protozoa into the bloodstream where another mosquito can incidentally collect them during a blood-feed. This phase of parasitaemia, when many parasites are circulating in the blood, corresponds to an acute attack of symptoms. 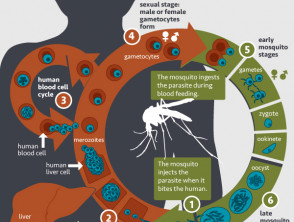 What are the clinical features of malaria?

What are the cutaneous features of malaria?

Mucosal involvement has not been reported.

Skin signs may indicate complications such as jaundice, anaemia, and DIC.

Skin side effects of malaria treatment and chemoprophylaxis

Tetracyclines can cause photosensitivity including photo-onycholysis. Photosensitivity is an important adverse effect in tropical countries, and appropriate sun protection should be recommended when doxycycline is prescribed for chemoprophylaxis in travellers.

Hydroxychloroquine can cause morbilliform or psoriasiform rashes in up to 10% of people.

What are the complications of malaria?

Uncomplicated malaria can progress to severe disease, with organ involvement including:

P. falciparum malaria in pregnancy can cause severe disease in the mother resulting in premature delivery or low birth-weight baby. Congenital malaria is due to transplacental infection from the mother or during delivery and presents in the first 48 hours after birth. Neonatal malaria presents three weeks after birth following an infected mosquito bite. Both forms carry a high mortality rate.

How is malaria diagnosed?

Antigen-based rapid diagnostic tests (RDT) detect specific antigens produced by the parasite. Some are species specific, while others can detect multiple species.

What is the differential diagnosis for malaria?

Malaria presents as a nonspecific acute febrile illness. The differential diagnosis therefore is long and includes many other tropical infectious febrile illnesses, including:

What is the treatment for malaria?

The best treatment option for malaria is prophylaxis including clothing, netting over beds, mosquito repellents, and chemoprophylaxis with medications such as doxycycline and hydroxychloroquine, depending on the geographic location. Work on vaccine development continues.

Vector control to prevent the spread of mosquitoes can include:

Treatment may be required for:

Antihistamines have been reported to ease the symptoms of cutaneous involvement.

Supportive measures for complications may also include ventilation and/or dialysis.

The medication used for prophylaxis and treatment will depend on drug resistance and severity of disease. Drugs used include:

What is the outcome for malaria?

Urticaria is reported to subside 12–48 hours after starting antimalarial treatment. All skin symptoms resolve within days of treatment without recurrence.

Severe malaria can deteriorate rapidly, with death within hours or days due to missed or delayed diagnosis, but also sometimes despite appropriate treatment and intensive care.

P. falciparum malaria can be rapidly fatal within 24–48 hours of presentation, especially in children.