Melanocytic naevi and melanoma in pregnancy

What changes occur in melanocytic naevi during pregnancy?

Transient changes in the dermoscopic appearance of moles have been identified during pregnancy: new dot formation, thickening of the pigment network, darkening of globules, and increasing numbers of vessels have been described as the pregnancy-related naevus pattern. These changes are subtle and not suggestive of melanoma.

Dermoscopic change in a melanocytic naevus during pregnancy 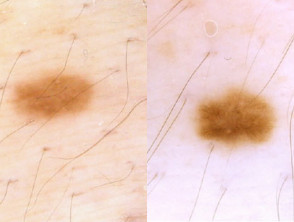 Reactivated naevus occurs occasionally in pregnancy as a focal change in a long-standing naevus with increased mitotic figures on histology. Superficial micronodules of pregnancy (SMOP) are nests of heavily pigmented upper dermal melanocytes which contrast with the usual non-pigmented dermal melanocytes.

What changes in a melanocytic naevus should raise concern for melanoma in pregnancy?

Any clinical, dermoscopic, or histologic features suggestive of melanoma should be viewed with suspicion and not attributed to pregnancy. New, changing, or unusual-looking pigmented lesions should be assessed and investigated as per usual protocols.

What is pregnancy-associated melanoma and who gets it?

Pregnancy-associated melanoma is defined as a melanoma diagnosed during pregnancy or within 12 months of delivery.

Metastatic pregnancy-associated melanoma (MPAM) may present following a previous melanoma excision. Recurrent melanoma is most common in the first two to five years after diagnosis. Current evidence does not suggest pregnancy affects recurrence-free or overall survival related to a previously treated melanoma.

How is melanoma in pregnancy diagnosed?

Prompt complete excisional biopsy with histological examination should be performed on any concerning skin lesion. Minor cutaneous surgery using local anaesthetic can be performed safely during pregnancy and should not be delayed until after delivery if there is any suspicion of melanoma.

What is the treatment for melanoma in pregnancy?

Following initial complete excisional biopsy and confirmation of melanoma on histology, wide local excision around the initial surgical site is performed as usual. If surgery requires general anaesthesia and cannot be deferred, the second trimester is the safest time to perform it. Anaesthetic agents should be avoided in the first trimester if possible.

Staging should be performed as necessary with ultrasound and magnetic resonance imaging (MRI) considered the safest techniques during pregnancy. Computerised tomography (CT) could be considered if the benefits clearly outweigh the risks.

Sentinel lymph node biopsy provides prognostic information only and is difficult to justify during pregnancy. If considered essential for treatment planning, technetium radioactive tracer alone (without the blue dye) should be used as a marker.

How may the baby be affected by maternal melanoma in pregnancy?

Treatment of melanoma during pregnancy

What is the outcome for melanoma in pregnancy?

Early reports suggesting a worse prognosis for pregnancy-associated melanoma have not been supported by recent large studies, but this remains controversial. This may reflect the tendency in the past to misattribute changes in a mole to normal changes of pregnancy, with subsequent delay in diagnosis and treatment.

While the effects of oestrogen and progesterone on melanoma are under investigation, it is now generally accepted that oral contraceptive use is not contraindicated after a diagnosis of melanoma in pregnancy. Subsequent pregnancy should be delayed for two to three years after a diagnosis of a high-risk melanoma to allow for adjuvant therapies if required. The decision regarding further pregnancies will need to be considered on an individual basis.

Metastatic pregnancy-associated melanoma (MPAM) has a very poor outcome for the mother. Involvement of the placenta and fetus is rare but can occur.