What is superficial spreading melanoma?

Superficial spreading melanoma is the most common type of melanoma, a potentially serious skin cancer that arises from pigment cells (melanocytes).

It is a form of melanoma in which the malignant cells tend to stay within the tissue of origin, the epidermis, in an ‘in-situ’ phase for a prolonged period (months to decades). At first, superficial spreading melanoma grows horizontally on the skin surface – this is known as the radial growth phase. The lesion presents as a slowly-enlarging flat area of discoloured skin.

Who gets superficial spreading melanoma?

According to New Zealand Cancer Registry data, 2256 invasive melanomas were diagnosed in 2008; 48% were in males. At least 40% were reported to be superficial spreading melanoma. There were 371 deaths from all types of melanoma in 2008 (69% were male).

Superficial spreading melanoma accounts for two-thirds of cases of melanoma in Australia and New Zealand. It nearly always arises in white skinned individuals. Although more common in very fair skin (skin phototype 1 and 2), it may also occur in those who tan quite easily (phototype 3). It is rare in brown or black skin (phototype 4-6).

Superficial spreading melanoma is equally common in males and females. Only 15% of melanomas arise before the age of 40, and it is rare under the age of 20 (<1%).

The main risk factors for superficial spreading melanoma are:

Superficial spreading melanoma tends to occur at sites of intermittent, intense sun exposure, especially on the trunk in males (40%) and the legs in females (also 40%).

Superficial spreading melanoma presents as a slowly growing or changing flat patch of discoloured skin. At first, it often resembles a mole or freckle / lentigo. It becomes more distinctive in time, often growing over months to years or even decades before it is recognised. Like other flat forms of melanoma, it can be recognised by the ABCDE rule: Asymmetry, Border irregularity, Colour variation, large Diameter and Evolving.

The characteristics of superficial spreading melanoma include: 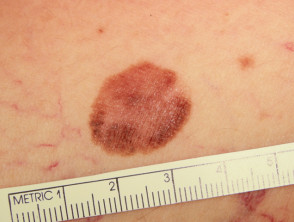 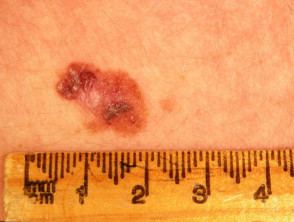 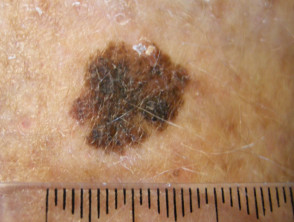 What is the cause of superficial spreading melanoma?

Superficial spreading melanoma is due to the development of malignant pigment cells (melanocytes) along the basal layer of the epidermis. The majority arise in previously normal-appearing skin. About 25% arise within an existing melanocytic naevus (mole), which can be a common or normal naevus, an atypical or dysplastic naevus or a congenital naevus.

What triggers the melanocytes to become malignant is not fully known. Specific gene mutations such as BRAFV600E have been detected in many superficial spreading melanomas and these mutations may change as the disease advances.

It is essential to diagnose superficial spreading melanoma accurately. Clinical diagnosis is aided by dermoscopy and skin biopsy (usually excision biopsy). Those with melanoma that is more than 0.8 mm thick may be advised to have lymph node biopsy, imaging studies and blood tests.

Dermoscopy, or the use of a dermatoscope, by a dermatologist or other doctor trained in its use can be very helpful in distinguishing superficial spreading melanoma from other skin lesions, such as

The most frequently observed dermoscopic features of superficial spreading melanoma are:

If the skin lesion is suspicious of superficial spreading melanoma, it is best cut out (excision biopsy). A partial biopsy is best avoided, except in unusually large lesions. An incisional or punch biopsy could miss a focus of melanoma arising in a pre-existing naevus.

The pathological diagnosis of melanoma can be very difficult. Histological features of superficial spreading melanoma in situ include the presence of buckshot (pagetoid) scatter of atypical melanocytes within the epidermis. These cells may be enlarged with unusual nuclei. Dermal invasion results in melanoma cells within the dermis or deeper into subcutaneous fat.

The report may also include comments about the cell type and its growth pattern, invasion of blood vessels or nerves, inflammatory response, regression and whether there is associated in-situ disease and/or associated naevus (original mole).

The deeper the Clark level, the greater the risk of metastasis (secondary spread). It is useful in predicting outcome in thin tumours, and less useful for thicker ones in comparison to the value of the Breslow thickness.

What is the treatment for superficial spreading melanoma?

The initial treatment of a primary melanoma is to cut it out; the lesion should be completely excised with a 2 mm margin of normal tissue. Further treatment depends mainly on the Breslow thickness of the lesion.

After initial excision biopsy; the radial excision margins, measured clinically from the edge of the melanoma, recommended in the The Australian and New Zealand Guidelines for the Management of Melanoma (2008) are shown in the table below. This may necessitate flap or graft to close the wound. Occasionally, the pathologist will report incomplete excision of the melanoma, despite wide margins. This means further surgery or radiotherapy will be recommended to ensure the tumour has been completely removed.

In New Zealand, many surgeons recommend sentinel node biopsy for melanomas thicker than 1 mm, especially in younger persons. However, although the biopsy may help in staging the cancer, it does not offer any survival advantage. The necessity for sentinel node biopsy is controversial at present.

The main purpose of follow-up is to detect recurrences early but it also offers an opportunity to diagnose a new primary melanoma at the first possible opportunity. A second invasive melanoma occurs in 5–10% patients with melanoma; an unrelated melanoma in situ affects in more than 20% of melanoma patients.

The follow-up appointments may be undertaken by the patient's general practitioner or specialist or they may be shared.

Tests are not typically worthwhile for stage 1/2 melanoma patients unless there are signs or symptoms of disease recurrence or metastasis. And no tests are thought necessary for healthy patients who have remained well for 5 years or longer after removal of their melanoma, whatever stage.

The Melanoma Guidelines report that metastases are rare for melanomas < 0.75 mm and the risk for tumours 0.75–1 mm thick is about 5%. The risk steadily increases with thickness so that melanomas > 4 mm have a risk of metastasis of about 40%.