Sporotrichoid lymphocutaneous infection is characterised by the appearance of subcutaneous nodules that progress along dermal and lymphatic vessels. It is also called nodular lymphangitis.

The clinical presentation is often described as sporotrichoid spread. The name 'sporotrichoid' is because the most common infection is sporotrichosis. 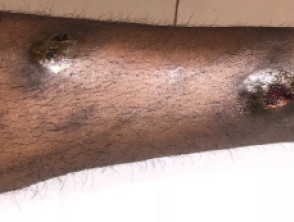 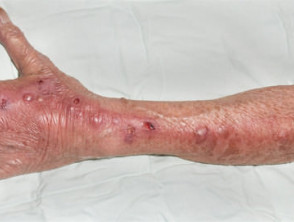 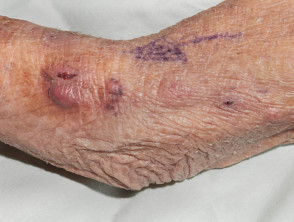 Sporotrichoid spread is mostly observed on an upper limb. The first lesion starts distally, for example, on the hand, wrist or forearm. Subsequent lesions arise proximally, that is, further up the arm, in an irregular, roughly linear, distribution.

Each lesion is an inflamed, irregular, firm nodule, which may suppurate or ulcerate.

Sporotrichoid lymphocutaneous infection is usually due to an uncommon infection transmitted by primary inoculation through a minor injury or insect bite:

It has also been described with the following infections.

Accurate diagnosis requires identification of the causative organism. This may be undertaken by:

Treatment depends on the cause, so it is very important to identify the organism before starting a course of antibiotics or oral antifungal medicine. For example:

Other conditions with sporotrichoid spread

Lesions of cutaneous sarcoidosis are also occasionally noted to have sporotrichoid spread.

In-transit metastases are sometimes considered in the differential diagnosis of lymphocutaneous infection, where a secondary tumour – usually melanoma – arises in the skin between the excision site of the primary melanoma and its nearest lymph node.